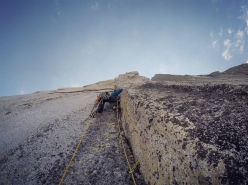 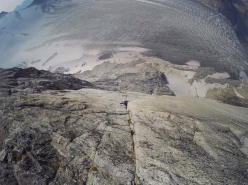 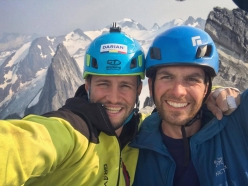 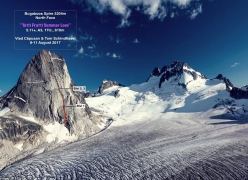 Vlad Capusan reports about Tutti Frutti Summer Love (5.11+, A3, 17 pitches, 610m), the big new route climbed up the North Face of Bugaboos Spire in British Columbia, Canada together with Tom Schindfessel from 8 - 11 August 2017.

In early August, Tom Schindfessel and I traveled to the Bugaboos in British Columbia hoping to establish a new route up the North Face of Bugaboos Spire 3204m. Three days of travel, 80 kg of food and gear and a lot of fun on the way were followed by our first day and a half preparing camp and hauling gear to the Applebee campground. The result, one broken haulbag and two broken backs.

After studying the wall carefully we identified a possible line. We wanted to climb using trad gear and normal pegs only, no bolts. The weather was too good to waste time and, after warming up on the routes Sunset crack and Sweet Silvia on Snowpatch Spire, we decided to go for it.

After a 7-hour approach we reached the base of the North Face and simul-climbed the first slabs. We started climbing the North Face capsule-style on August 8. The wind blew steadily and unwavering down the glacier but the weather was perfect. Being a north face we did not have a lot of sun, but towards the evening we enjoyed the most beautiful sunsets across the Volwell Glacier.

We established our first camp on a large ledge. From there we climbed 50 meters left to the clear cleft between the  ledge and the Main Pillar. In this first part the rock was unexpectedly clean with big flakes, and we reached a massive “square” with a big overhang. Because of the books that sprang from the wall, we baptised this section - The Library Square.

On the next day we followed a crack system with two more difficult sections, where we had to clean some offwidth cracks. These took us to the second ledge where we made our second bivouac. We realised quite quickly that the biggest problem was water: the wall was extremely dry, so we knew we’d have to halve our multi day climbing plan.

On the third day we woke up early and started climbing light, with only our climbing gear and one small haulbag. After 150 m we crossed onto a large golden face to the right of the corner where we climbed a tiny crack and small corners that connected upwards past immaculate and perfect rock. After a while our small tiny crack closed unexpectedly. We tried some free climbing alternatives but failed. In the end we managed to aid past this section (A3), then continued past some overhanging flakes. This was probably the most difficult part of the route; we managed to free climb this section, despite the rock not being particularly clean.

It was a long day but we enjoyed every pitch in perfect weather. Towards the end of the day we reached the third ledge, from where we decided to push for the summit. The upper part of the wall was full of loose boulders that could drop at any moment, and like cats we carefully crept past these to reach the top of North Bugaboos Spire at 7pm. We were super happy, but we knew we had a long party night ahead of us, with no drinks.

After the ropes got stuck a few times in the flakes during the rappels,  we ended up making another bivouac on the face, but after 19 hours of climbing we slept like babies. We celebrated with a nice coffee in the morning.

We named  our route Tutti Frutti Summer Love after a famous song that inspired us during the climb. It was an amazing adventure from start to finish. We enjoyed every pitch of our climb and the remoteness of the Volwell Valley was outstanding. We had hardly found any information about the only two existing routes on the wall, and ended up being surprised by the isolation and the potential of new routes on this face.

22.06.2014
Dreams, the video by Tad McCrea
The video of Tad McCrea's last year of climbing in the mountains throughout the Western Hemisphere.