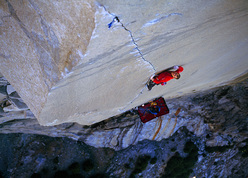 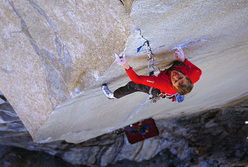 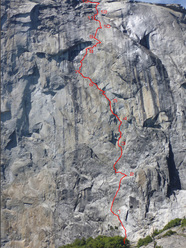 Leo Houlding interview after The Prophet on El Capitan

Interview with British climber after the first ascent of The Prophet on El Capitan, Yosemite, USA, carried out in 6 days in October 2010 with Jason Pickles and graded E9 7a, 5.13d R, 8b, 510m.

"A first ascent on El Capitan is, in my eyes, the ultimate achievement in rock climbing... we did it in the best style we could, it's fantastic. It's a lifetime achievement." This is what Leo Houlding had to say to former BBC Radio producer Lissa Cook once back on home soil after his first ascent of The Prophet on El Capitan in Yosemite Valley, USA, carried out just a couple of days ago with Jason Pickles. The two had first attempted the line almost a decade ago, after The West Face of Leaning Tower in 2001, and the route weighs in at a mighty E8 7a, 5.13d R, 8b, 510m, and this is what Leo had for us

The Prophet was 9 years in the making, though really we had 5 serious sessions during that time. I'm very happy, it's been a long time in the making but finally I have my own route on the Capitan. Done in the proper way.

So did you free all the pitches from the ground-up in one push?
With my climbing partner Jason Pickles I led every pitch from the ground, in sequence in a continuous 6 day ascent. Jason seconded everything except the Devil's Dyno and the A1 beauty. We did 8 pitches on the first day, one the next morning and then sat out a serious 3-day storm.

One of the worst in living memory according to reports...
There was nobody else on the wall, we were in a waterfall, in a flooded port-a-ledge unable to escape or be rescued. Just as it started to look like we would not be able to continue the storm cleared and we were able to dry all our gear. Thankfully I had managed to protect my boots and chalk from the river.

The it was time for the crux!
Yes, thenI had to do the A1 beauty, by far the crux of the route and one of the hardest pitches I've ever done. Not easy after 80 hours in a confined, cold, wet place but on my 4th attempt I did it. We topped out late on Wednesday 28 October and flew home early on 29th!

Which leads to...
The most beautiful and hardest pitch of all - the A1 beauty from Eagles Way. A 35m desperately thin crack in a magnificent position. 5.13d. Although it is a crack it is impossible to stop and place gear for large sections, so you can easily take 15m+ falls. A V8/9 boulder problem at the start leads to 25m of 5.13b fingertip crack, crimp, smear and smedging, then another V8/9 at the top.

So what about the gear?
I placed the gear on lead on my first attempt and left it in place for the next goes. I fell of the last boulder problem 3 times but did it on my last go on the last day!

Talk about perfect timing! Final success has come about almost a decade after your first attempt. How come?
My climbing has evolved - my onsight ability has remained constant but my redpoint ability has improved greatly. I am more able to focus on one goal and do not get bored so quickly.

Thanks Leo and congratulations. We look We look forward to seeing all the action on the upcoming Psyche II dvd.