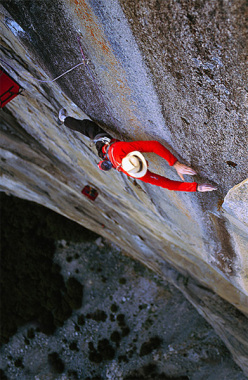 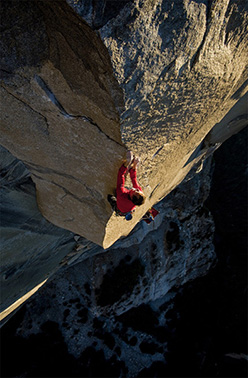 Leo Houlding and The Prophet on El Capitan, Yosemite

"Yosemite is like Never-Never Land, where Peter Pan and the Lost boys live and play and never grow up." This is how British climber Leo Houlding sums up America's Yosemite valley, a place he first visited in 1998 and which culminated, after 15 climbing seasons, in the first ascent of The Prophet in October 2010 together with Jason Pickles. The new route ascents over 500m of terrain with difficulties up to E9 7a, 5.13d R, 8b and has two distinct cruxes on the upper section, the unbelievable Devils Dyno and the immaculate A1 Beauty, described in detail by Houlding below and featured in the award-winning film Psyche 2. If you're interested in repeating the route, here's word of warning though from the man himself: "while this second half is more difficult and less dangerous, there is some really scary climbing lower down. The bottom half of the route is more serious with some poor rock quality and very few bolts."

The A1 Beauty
The A1 beauty is a dream line, the most perfect first ascent I have ever done. The geometry of the rock, sustained difficulty of the climbing, natural protection and awesomely exposed position create a simply perfect pitch. It is only just possible: if there were a few less holds or if they were a little further apart I don't think it would go free
It starts off a good ledge with a very difficult boulder problem and is continually hard right to belay, 30m above. The crack is tends to be too thin to fit your fingers in, but it has a small lip on which you can crimp, and the wall is slightly under vertical, so in some respects it's more face than crack climbing. The pitch is protected exclusively by micro cams and there is 1 peg before the final boulder problem. It gets the sun from 8am onwards so it must be attempted very early for good conditions.
It's only 100m below the summit so is quite easy to rappel in to and I think it could become a popular pitch in it's own right, without the rest of the climb, similar to the Salathe headwall.

The Devils Dyno
In 2009 I rappelled down the top 300m of the Prophet to inspect the line I had been looking at from the meadow for almost 10 years, and I discovered what was to become the A1 beauty very close to the top. Descending the 5m roof off the Devils Brow was very complicated and I made some very scary tension traverses tying to find a line of connecting holds through the steep, loose diorite.
It was then that I first saw the possibility of the Dyno at the start of a 30m traverse and I immediately tried it from the rappel ropes: it looked and felt impossible. In 2010 I returned to try the route properly and set up a crazy double toprope. From a very stretched, awkward starting position with foot holds in the wrong place it is about 2.5m sideways to a hollow flake.
It is hard to visualise the move but with a great amount of self belief and commitment I finally stuck it. It's a crazy move and impossible to grade and thankfully right at the start of the pitch.
The difficulties do not end with the dyno and some wild moves lead sideways around the roof where it joins The Secret Passage for about 10m. It is probably the wildest 30m of climbing I have ever done in the most outrageous position.