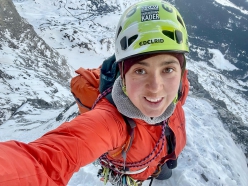 On the 25th of March 2022 Austrian alpinist Laura Tiefenthaler completed a solo ascent of the North Face of the Eiger. Tiefenthaler's ascent is possibly only the second female solo after Catherine Destivelle's ground-breaking ascent in 1992, 30 years ago.

Extremely stable conditions across the Swiss Alps have resulted in an unprecedented run of ascents of the classic 1938 Heckmair route on the North Face of the Eiger, the most remarkable of which is no doubt the solo ascent carried out two days ago by Laura Tiefenthaler.

As previously reported, Tiefenthaler repeated the route in a single day on the 8th of March with Germany's Jana Möhrer and, banking on this knowledge, she decided to dream even bigger. She set out on the 24th but, in the wrong mind frame, early on she made a route finding mistake, lost 2 hours and consequently bailed, resting all day at the train station while psyching up for the climb.

She set off from the train station at 1 am on the 25th of March and, climbing swiftly but safely and rope-soloing the hard pitches and some shorter sections, she summited at 4 pm before descending by sliding down on the soft snow as much as possible.

The first solo ascent of the Heckmair route on the Eiger North Face was carried out on 2/3 August 1963 by Swiss mountain guide Michel Darbellay. The first female ascent was carried out a year later by Germany's Daisy Voog with Werner Bittner from 1 - 4 September 1964, while the first female solo was famously carried out by 32-year-old Catherine Destivelle from France, in 17 hours and in winter, on 10 March 1992. Tiefenthaler's ascent of the Heckmair route is possibly only the second female solo after Destivelle's ground-breaking ascent 30 years ago.

Writing on her Instagram account, Tiefenthaler stated "DARE TO DREAM BIG. Another trip to the Eiger – this time on my own.

Seeing the promising forecast at the end of my guides course last week, I toyed with ideas for what to do, when Rolando Garibotti came up with the idea to go back to the Heckmaier, by myself. For him it seemed like an obvious choice, after climbing it with Jana had felt so good 2 weeks earlier. For me it was not even a possibility, but when he mentioned it, desire immediately grew. Doubts about my abilities and too many people on the wall were on my mind. However, the dream was born so I drove there to have a look.

On 24th my mind game was not the best, and I managed to take the wrong turn, loosing 2 hours, so I bailed, to eventually go back the next day.

I spent the whole day at the train station, watching tourists, recharging and setting my mind in the right place. The first rule was to get down safely, the 2nd to have fun, not to have it feel as an exam, but rather go there with curiosity.

On the 25th, I set off at 1am. I felt good. Doubts were magically gone. With curiosity as my main motivation, and knowing that up to a point, I could get down, it felt safe to go explore. As I progressed, confidence grew. I rope-soloed all the hard pitches and some short sections. Reaching the Traverse of the Gods at 10am, I knew that time was on my side. I slowed down, prioritizing safety over speed, and topped out at 4pm, exceeding my expectations.

I shared the climb with 3 other parties, but mostly managed to stay a good distance away from them, having the type of experience I was looking for. I passed them in the lower part, had most of the climb to myself, until the exit, where out of caution I rope-soloed, so I let 2 of the teams passed me back. There were no issues, we were kind to each other, and had fun.

What a trip! What an experience!

Thanks Rolo for the encouragement, for helping ask the right questions, and being there, on the other side of the phone. Sorry for scaring the shit out of you, but it’s your own fault. It is great to have a friend and mentor who believes in ones abilities more than oneself without putting pressure.

13.03.2007
Ueli Steck races the Eiger North Face in 3 hours 54 minutes
On 21 February Ueli Steck from Switzerland climbed the North Face of the Eiger in a record time of 3.54.