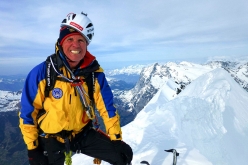 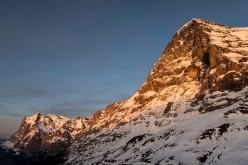 The North Face of the Eiger. In 1974 Peter Habeler climbed the Heckmair route in a record time of 10 hours together with Reinhold Messner. Now the 74-year-old has climbed the mountain once again, this time with David Lama
Photo by Timeline Production

Timeless mountaineering: aged 74 Peter Habeler, one of the world’s greatest mountaineers who in 1978 made the first ascent of Everest without supplementary oxygen together with Reinhold Messner, has now climbed the North Face of the Eiger once again. In 1974 Habeler had climbed the mountain in record time with Messner, while now he repeated the route with another world famous alpinist, young David Lama.

This is a mountaineering at its best, alpinism that brings a smile to your face. It’s a story that encompasses a thousand themes, all within one greater story. The plot is roughly as follows: the other day Austrian alpinist Peter Habeler climbed the North Face of the Eiger via the classic Heckmair route. Repeating this line up the infamous Swiss face is an important achievement in its own right, but if you mention the fact that Habeler is 74 years old, then things obviously become somewhat more interesting. Habeler is probably the oldest to climb the white spider but, put frankly, we really couldn’t care less about this record. What interests us far more is that Habeler, before marvellously reaching his 74 years of age, was considered one of the strongest - and at the same time, least known - alpinists of all times.

Unsurprisingly, Habeler already knew the Eiger North Face. He’d climbed it once before, way back in distant 1974. In another era therefore, when mountain climbing as we know it nowadays didn’t exist. On that 14th of August, the 32-year old Habeler rocketed up the North Face in record time with an exceptional climbing partner, Reinhold Messner. The duo became the first to climb that ogre in a mere 10 hours, a time that left everyone speechless and flung the doors wide open to a style of mountaineering that was only just beginning to be discovered.

In the following year, in 1975, the two experimented this unprecedented speed and lightweight approach on the high mountains, climbing a new route in pure alpine style - i.e. without fixed ropes, no preestablished camps and without supplementary oxygen - up Gasherbrum I. At 8068m this is the eleventh highest mountain in the world, also referred to as Hidden Peak. Their "by fair means" ascent literally shocked the mountaineering establishment and, following in the footsteps of legendary Hermann Buhl, they revolutionised the previously accepted style of climbing the highest mountains in the world. With their ascent Habeler and Messner not only raised the bar significantly, they also set a yardstick by which, from that day onwards, all other high altitude climbs would be judged.

The groundbreaking ascent of Gasherbrum I was eclipsed four years later by their own making, with their 1978 master stroke: on 8 May Habeler and Messner were the first to reach the summit of Everest without supplementary oxygen. This ascent and subsequent famous descent provided a definitive, unequivocal answer to all the doubts regarding the possibility of the human body surviving in that thin air without oxygen bottles.

Habeler is obviously much more though than these extraordinary ascents of Gasherbrum and Everest. Climbs that stand out are his new routes on East Face of Yerupajá Grande (6617 m) and Yerupajá Chico in the Andes, his ascent of McKinley in Alaska (1980), Cho Oyu (1986), Nanga Parbat (1985), Kanchenjunga (1988), the first European ascent of the legendary Salathé Wall big wall up El Capitan in Yosemite together with Doug Scott in 1970, his countless climbs in the mountains of Tyrol, the Dolomites and Mont Blanc massif. What stands out above all though is Habeler’s desire, innate and immutable, to climb mountains and to share his love for this vertical world. And this is how two decades ago the mountain guide from the Zillertal "discovered" the young climbing prodigy, David Lama. At the time Lama was only five, now he has evolved into a world-class mountaineer himself.

It is fitting therefore that the other day Habeler chose Lama as his climbing partner. for the record, this was Lama’s first time up the Heckmair route. We can only imagine their handshake on the summit. Imagine Habeler’s joy at repeating the route, 43 years after that groundbreaking ascent. It was, most certainly, a beautiful moment. Hut ab, chapeau, to the "grand seigneur" of mountaineering.