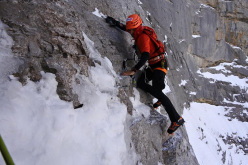 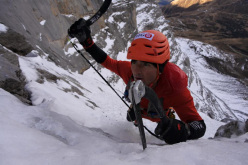 Ueli Steck during his ascent of the North Face of the Eiger in 2:23
Photo by archivio Ueli Steck 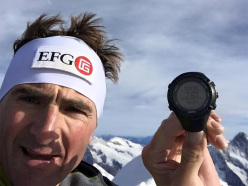 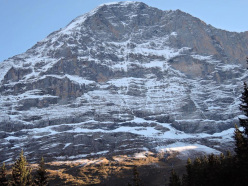 The North Face of the Eiger
Photo by Ueli Steck

On 16/11/2015 Swiss alpinist Ueli Steck climbed the Heckmair route up the North Face of the Eiger in 2 hours and 22 minutes, beating the previous record set in 2011 by Dani Arnold by 6 minutes

New speed record up the North Face of the Eiger. This is what Ueli Steck "got up to" or, better still, got up to again on Monday morning when, after setting off at 8:49, he blazed up the historic Heckmair route in just 2 hours, 22 minutes and 50 seconds. This time is simply... outstanding. In doing so Steck has not only improved his (already exceptional) 2008 personal best by 25 minutes, but he has also "beaten" the old record, set on 20 April 2011 by fellow countryman Dani Arnold who stopped the clock after 2 hours and 28 minutes. But these are merely the numbers of the Swiss Machine's latest antics, to which details must be added in order to attempt to comprehend the entity of Steck’s latest ground-breaking ascent up the classic 1938 outing. And also to undeline once again (as Steck himself does) that the Eiger, like all mountains, certainly isn't race track.


Ueli, well, what can we say this time? Congratulations once again! Where did this suddenly come from?

Thanks! It derived from the fact that I was curious. I was intrigued to see the difference now with what I’d done in the past, using a different style of climbing, in different conditions. When I climbed the route in 2008 I did so climbing free, and the trail wasn’t broken. This year there’s a good trail and I asked myself how different it would be if I followed it, using all the means available (pegs, fixed ropes. Ed).

Well, a glance at the clock suggests at least 25 minutes difference…
Yes, but in truth I climbed at a relatively moderate pace. In 2008 my heartbeat checked in at 190, this time 160. Let’s just say I pushed myself less physically.

Nevertheless you were a whole lot faster
Well, first of all there was a track to follow. I’d climbed the route three times recently, once as you know with Kilian Jornet Burgada, then last week together with Nicolas Hojat when we climbed the mountain together in 3:46, perhaps the fastest team ascent so far. I knew what lay in store and that conditions were perfect.

How did you climb?
I didn’t climb everything free. I pulled on some in-situ pegs, on the Hinterstoisser traverse I used the fixed ropes. I’d say I repeated the route in a similar style to most who repeat it. As to the gear I used, I only had a small backpack with the shoes I used for the descent, half a litre to drink, some energy gels. A harness, a sling and 4m cord which I didn’t have to use.

You knew you’d be quick
It didn’t surprise me, but as I said, I set off mainly because I wanted to understand the differences. And I really need to underline that conditions were really, really good. I felt safe.

Which leads to the next, perhaps impertinent question Ueli: hadn’t you said you’d stop doing things like this?
You’re not wrong. After my 2008 ascent of the Eiger, after Annapurna in 2013 it was clear to me that there was no point continuing in this direction, it’s simply too dangerous. But on Monday things were different, conditions were excellent. You just can’t compare them. And even if it doesn’t seem so to you, in reality it was all very safe. And as I said, I never pushed myself to the limit.

So let’s just say you had fun
Extreme fun! But for this to happen conditions need to be perfect, you need to be conscious of this. Seen in this light, it’s worth climbing routes like this.


Eiger North Face - the classic 1938 Heckmair route
First ascent: Heinrich Harrer, Anderl Heckmair, Fritz Kasparek and Wiggerl Vörg, July 1938
The North Face of the Eiger contains numerous routes of varying difficulties. The easiest remains the classic route established in 1938. This ascends 1800 vertical meters with difficulties up to ED+: rock V-, aid (A0), and ice slopes up to 60°. Usually the climb requires between 1 - 3 days, depending on the ability of the climbers and the conditons, and in some cases even more time may be required. The route is considered extremely dangerous due to rockfall, avalanches and falling ice.
The times for speed ascents start at the Sandri & Menti memorial tablet