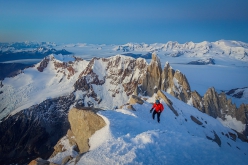 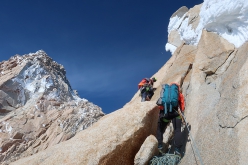 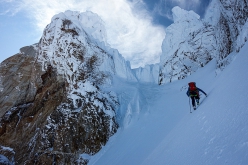 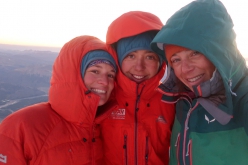 German alpinist Raphaela Haug talks about her first trip to Patagonia with climbing partner Laura Tiefenthaler, during which they climbed Cerro Torre and, with Barbara Vigl, ascended Fitz Roy.

What can you expect from your first trip to Patagonia? Of course you always have dreams and desires about the mountains you’d like to climb. In my experience though all you can do in advance is hope and prepare for the best, but not really expect anything at all. The weather is unstable and just really bad, the granite steep and challenging; Patagonia is not an easy place to climb. The fact that we managed to climb five peaks in the five weeks we were there, including Cerro Fitz Roy and Cerro Torre, still doesn’t feel real to me.

Laura Tiefenthaler, Fabian Buhl and I approached Cerro Torre via the Standhardt Col, together with Christophe Ogier, Mathieu Perrussel and Jean Baptiste Tapie. Fabi wanted to paraglide off the summit, and Laura and I were happy to provide him with our support. We climbed to the top of the Elmo where we set up camp. The next day we swung leads up the climb, Laura led the first mixed pitches and then Fabi took over. The headwall, a steep ice pitch, was covered by 25cm of rime ice that was not easy to clean. Digging tunnels through the first two mushrooms was an unforgettable, bizarre experience. Who knew that things like this could really exist in nature?

Christophe took the lead on the final rime mushroom, climbing over two thirds of it before passing the baton to Italian climber Edoardo Saccaro who climbed the last section to the top. Opening most of the Ragni Route during its first ascent of the season felt very special. The grandeur of the scenery, with the mountains and never-ending glaciers to the west and endless expanse of steppe to the east, equalled the happiness I felt inside.

After our ascent of Cerro Torre we rested and refuelled at El Chaltén, patiently waiting for the next weather window. Although until our arrival the season had been difficult, with not much good weather between November and late January, somehow we got lucky and just three days later there was another window on the way - unbelievable! The plan was to climb with my two friends from Austria, Laura Tiefenthaler and Babsi Vigl. Our goal was Supercanaleta: a beautiful line up Cerro Fitz Roy first ascended by the Argentines Carlos Comesaña and José Louis Fonrouge in 1965. The first 1000m of the route ascend a snow and ice-filled couloir which is then followed by steep rock and mixed terrain that lead to the final snow slopes and the summit.

On the first day we made the long hike through the forest and across moraine and climbed up and over Paso Cuadrado to reach the start of the route - Patagonian approaches are long! That same evening, as darkness began to set in and with good snow conditions, we climbed the 1000m snow and ice couloir to a bivouac below a large block. The following morning we considered our options. We though about pushing for the summit that day and returning to our stashed bivouac gear at the block. Although we all felt this was a reasonable plan, we ultimately decided that a conservative approach would be wiser and therefore continued with all our gear. Things can change very quickly indeed in Patagonia and we reasoned we’d best stay prepared.

The climbing on the second day was more demanding than we had expected. Conditions were very tough; I wore my crampons for all but one pitch. The rime and ice covered rocks required lots of attention, requiring delicate mixed climbing instead of rock climbing. Nevertheless, we had a lot of fun as we worked our way up the mountain. It got late in the day though and we decided to bivouac once more, this time on the snow slopes just about twenty meters below the summit. I couldn't have imagined a better place to be than up there - even though a cold bivouac awaited us. Experiencing sunset and then sunrise from high on Fitz Roy was something I will never forget; the mountains glowed brilliantly and we were immersed in their incredible beauty. The restless and cold night was made easier gazing at stars to me totally unfamiliar, and I can safely say that this was one of the most beautiful nights of my life. In the morning we climbed to the summit, then abseiled down the line of ascent before making the long walk back to the road and returning to El Chaltén and some ice cream.

I feel privileged to have experienced a gentle and beautiful side of Patagonia. I experienced incredible moments with incredible friends in spectacular mountains, so many instances I will never forget. The question about whether I will return to Patagonia was answered during this first trip. Although it’s clear to me that things won’t always go as smoothly and as successfully as this time, I can’t help wondering what Patagonia will hold in store on my return.

Fitz Roy via Supercanaleta. Together with @laura_tiefenthaler and @babsi_vigl. . Frankly, I'm speechless. I don't now what to say... That we have such a good weather window and can climb up Cerro Torre was incredible. That we get another weather window and climbed Fitz Roy is just mega. What a great season here in Patagonia!! . We approched to the base on Wednesday, and then in the evening at dusk we climbed the 1000m of the ice tube without ropes. We bivouaced under the block and continued towards the summit on Thursday. The rock pitches were pure mixed climbing - I took off my crampons for exactly one pitch.. We knew that the weather would be great on Friday and so we decided to bivouac at the summit again. Friday morning we rappled down over the Supercanaleta and returned to Chaltén. . For me it was one of the most beautiful routes I have ever climbed. We had a lot of fun up there and the climbing was super nice. Thanks to Laura and Babsi for the perfect adventure. I am aware that quite a lot has to come together to reach the summit and I more than appreciate it :) . The pictures on which I am to be seen are from Babsi. #fitzroy #patagonia #patagoniavertical #elchalten #climbing #nationalpark #weatherwindow #goodtimes #MEalpinism #MEclimbing #tupilak37 #firefly @mountainequipment