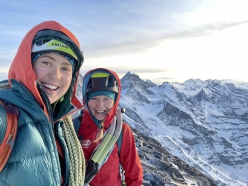 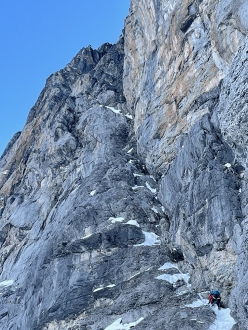 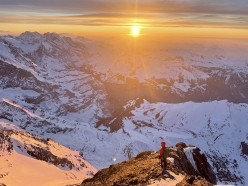 On 08/03/2022 Laura Tiefenthaler from Austria and Jana Möhrer from Germany repeated the classic Heckmair route on the North Face of the Eiger in Switzerland. Tiefenthaler reports.

On March 8th, Jana Möhrer and I climbed the Heckmair route on the north face of the Eiger, in a day.

Two weeks earlier I had been looking for a partner to go back to the Heckmair, which I had tried a year earlier with Raphaela Haug. Initially Jana answered that she had to study for an important medical school exam, but an hour later she sent another message saying: "Sometimes you have to do what you love. I am really motivated to go."

I knew exactly how Jana felt, because I had been in her place not long before, juggling medical school, climbing, and mountain guide courses all at once. I was really happy that she changed her mind. There are rules one sets for oneself, but sometimes it’s worthwhile throwing them out the window...

Over the last few years I had done quite a bit of climbing with Jana, and knew we would make a good team.   The weather forecast looked promising for several days, so we decided to let other teams do the hard work of breaking trail, and planned to start a week later. Since we know that studying doesn’t make you climb particularly fast, our idea was to climb the route with a bivouac part way up. We were pretty sure that we would need our time to get up such a big face.

On the 8th of March we started at half past one from Eigergletscher. We climbed efficiently, doing long pitches and pulling on all fixed gear we could find. When we neared the "Traverse of the Gods" I finally dared to look at my watch, and my inner clown started giggling and doing summersaults. It was barely midday.

We had planned to bivy there, but I said to Jana: "I think we have to climb on, otherwise we will spend quite some time here…" "Yes, indeed. There is no choice" she answered smiling, took a sip of tea and moved onto the traverse. Sometimes things go better than expected, and one can sit back, and enjoy the flow...

In the upper part tiredness and the altitude started slowing us down, so it was 6pm by the time we reached the top. It was not the worst place to be for sunset. We soaked in the views, and reveled in the beauty that mountaineering can at times offer.

Without much of a break we set off on the descent, being careful and taking our time, reaching the Eigergletscher at half past nine.

Hanging out there we realized it was International Women's Day, and agreed that our day of grace and flow had been a good way to celebrate it: in a place where there is no bias – because the Eiger does not care about your gender.

Eiger North Face - the classic 1938 Heckmair route
First ascent: Heinrich Harrer, Anderl Heckmair, Fritz Kasparek and Wiggerl Vörg, July 1938
The North Face of the Eiger contains numerous routes of varying difficulties. The easiest remains the classic route established in 1938. This ascends 1800 vertical meters with difficulties up to ED+: rock V-, aid (A0), and ice slopes up to 60°. Usually the climb requires between 1 - 3 days, depending on the ability of the climbers and the conditons, and in some cases even more time may be required. The route is considered extremely dangerous due to rockfall, avalanches and falling ice.

13.03.2007
Ueli Steck races the Eiger North Face in 3 hours 54 minutes
On 21 February Ueli Steck from Switzerland climbed the North Face of the Eiger in a record time of 3.54.