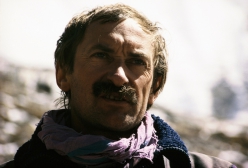 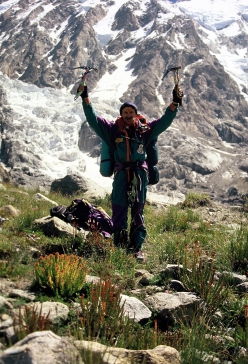 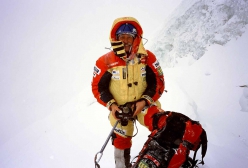 Wielicki is not only the fifth man to climb all fourteen eight-thousanders, but he is also best known for being the first man to climb three of them - Mount Everest, Kangchenjunga, and Lhotse - in winter. Often regarded as one of the greatest Polish climbers in history, Wielicki’s most impressive climbs and routes, such as the solo ascent of the eastern wall of Dhaulagiri in 1990 or the 1996 solo ascent of Nanga Parbat became essential in the evolution of the alpine style of climbing. Apart from his impressive climbing skills, Wielicki is known for the fortitude of character and determination.

Born in 1950, Wielicki began his mountaineering career aged 20. 1973 brought his first notable achievement, which set the trend for most impressive accomplishments of the climber - Wielicki became the first man to take the Kazalnica (i.e., the Pulpit) Pillar route in the winter. Like many climbers of the 1970s and 1980s, he progressed from the Tatra, the Alps, the Dolomites, the Caucasus, the Pamir and Hindu Kush to the Himalayas.

The Polish climber became famous for his impressive winter ascents marking 1980s as the golden time for winter high-altitude climbing.
Wielicki made his name as the first man (together with Leszek Cichy) to reach the peak of Mount Everest in winter. Four years later Wielicki took only 22 hours (16 hours up and 6 hours down) to summit Broad Peak, making him the first climber to make the ascent of an 8,000-meter peak in one day. In winter 1986, together with Jurek Kukuczka, he scaled Kangchenjunga. Another impressive ascent came in 1988, when Wielicki, while still wearing an orthopaedic brace, reached the summit of Lhotse in a solo climb.

Even though Wielicki has an extraordinary oeuvre of climbs to his name, he refers to his 1996 solo ascent of Nanga Parbat as his biggest solo achievement. In a determined attempt to reach the peak of the “Naked Mountain," Wielicki took the Kinshofer route and on September the 1st became the fifth climber in the world to ascent all of the 14 eight-thousanders — the “Crown of the Himalaya and Karakorum”. Following this impressive climb, Wielecki pursued the role of an expedition manager, most notably, managing the Polish team during their winter attempts to climb K2 in 2002/2003 and 2017/2018. Nevertheless, Wielicki did not abandon his passion for high altitude climbing and exploration of remote peaks of the Karakorum. In 2011 he became the first man to summit three five-thousanders in the Koksil Valley and was the first man to climb Khushrui Sar.

A member of the Explorers Club, Wielicki was awarded the Commander's Cross of the Order of Polonia Restituta in 2003, for his outstanding achievements in alpinism and for popularising the sport of climbing. In 2018, jointly with Reinhold Messner, he received the Princess of Asturias Award in the category of Sports. Wielicki’s contribution to the sport of climbing was honoured by the International Astronomical Union in 2017, when they approved the name of an asteroid as 123094 Wielicki.

The Lifetime Achievement Award was created to reward a career where the spirit has inspired the following generations, and Krzysztof Wielicki’s achievements continue to inspire and impress generations of climbers.

Krzysztof Wielicki will receive the award during the Piolet d’Or ceremony which, like last year, will take place from 19 - 22 September 2019 during the Ladek Mountain Festival in Poland. Within the next fortnight the long list of candidates will be revealed.

For information regarding the festival check out: www.festiwalgorski.pl

06.02.2013
Piolets d'Or 2013: Kurt Diemberger receives Lifetime Achievement Award
From 3 - 6 April 2013 Courmayeur and Chamonix will be the world's capital of alpinism thanks to the 21st Piolets d’Or, the international award dedicated to alpinism.