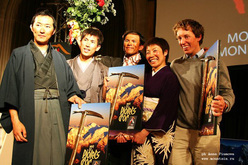 The winners of the Piolets d'Or 2009
Photo by Anna Piounova, www.mountain.ru 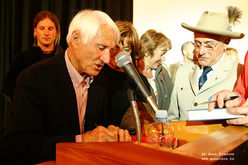 Last Saturday the Piolets d'Or 2009 were assigned in Chamonix and a total of three awards were given in this 17th edition: Kazuya Hiraide and Kei Taniguchi from Japan for their ascent of Kamet (India); Fumitaka Ichimura, Yusuke Sato and Kazuki Amano from Japan for their new route on Kalanka (India); Ueli Steck and Simon Anthamatten from Switzerland for their new route up Tengkampoche (Nepal). Italian mountaineer Walter Bonatti received the first ever award in recognition of his remarkable achievements. It is worth pointing out that Kei Taniguchi is the first woman to receive a Piolet.

"This edition signals the rebirth of the Piolets d’or. For us there are no winners, no loosers. The honored are the ambassadors of an art, a passion." These are the words Jury President Doug Scott used to describe the spirit of the 2009 "Oscar for alpinism" which was held last Saturday in Chamonix and which assigned three Piolets to climbs which distinguished themselves for their spirit of exploration, commitment and technical difficulties.

After a year "reflecting" the new Piolet returned to the stage therefore and the focus was on praising alpinism. To tell the truth we have always believed that this event was a moment of celebration and not for rivalries and that, despite its single prize, there was never one single winner or losers. From our point of view the big 2009 news was the fact that the prize was awarded to various ascents and that a new category was created to celebrate a climbing career. This latter prize was obviously appreciated, as the crowd rose to its feet to honour a visibly touched Walter Bonatti who used the occasion to announce his official withdrawal from the media. At 79 years of age, the decision is more than legitimate for the man who experienced (and continues to fuel) unforgettable days on Petit Dru, K2, the Matterhorn in winter, the first ascent of Gasherbrum IV and much, much more.

But back to the Piolets. Without wishing to take anything away from those who received the prizes, what seems unclear to us is the marked difference between the three categories. The line between spirit of exploration but above all the difference between commitment and technical difficulties. What does seem clear however is what Peter Habler stated. The Austrian, member of this year's jury and mountaineer who wrote an important chapter of Himalayan mountaineering, stated "It is not a question of reaching success at all costs, by using financial or technical means (such as oxygen, fixed ropes, Sherpas, doping products etc.…). What counts is the style. Today even if the summit hasn’t been reached, the expedition can be honoured if it is innovative." These words, from the man who three decades ago challenged all sceptics by carrying out the first ascent of Everest without supplementary oxygen together with Reinhold Messner, should make all pause and reflect. In the end it is style, class and the inner heart which render each experience unique. In the mountains, but also in other fields of life.


Spirit of exploration: First ascent of the South-West face of Kamet (7756m, India).
Kazuya Hiraide and Kei Taniguchi completed the first ascent of the Southeast face of Kamet in alpine style, between 26th September and 7th October 2008. They were the first climbers to set foot on this face and they completed the climb on their first attempt. Kei Taniguchi is the first woman to win a Piolet d’Or.
Name of Route: Samurai Direct.
Height of Climb: 1800m.
Difficulties declared: mixed M5+, ice 5+.