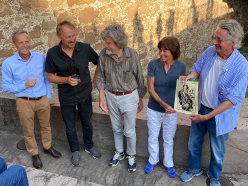 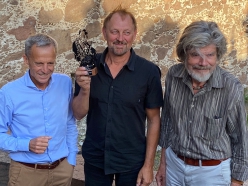 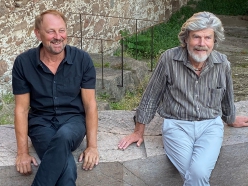 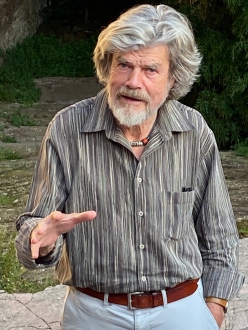 The report and words about mountaineering from the Paul Preuss Prize, awarded to the Austrian mountaineer Heinz Mariacher celebrated at Reinhold Messner's Firmian Castle. Mariacher is the eighth alpinist to receive the prestigious award after Messner himself, Hanspeter Eisendle, Albert Precht, Hansjörg Auer, Alexander Huber, Beat Kammerlander and Bernd Arnold.

It's hard to see so many great mountaineers gathered together all in the same place. But there they were, on Tuesday last, at Reinhold Messner’s castle, or rather, his Firmian Museum. They had all come to celebrate Heinz Mariacher receive the Paul Preuss Award. And there were so many prime players of (Germanic) mountaineering that it would be impossible to name them all. Here though are just a few: the brothers Alex and Thomas Huber, Beat Kammerlander, Hans Kammerlander, Wolfgang Nairz, Darshano L. Rieser, Hanspeter Eisendle, Christoph Hainz, Ernst Vogt, Lisi Steurer, Simon Gietl, Dani Arnold, Fabian Buhl, Adam Holzknecht, Heinz Zak and many, many others.

And then, of course, there was the lord of the magical castle, Reinhold Messner in person. He gave the opening speech before the awards ceremony, regarding the prize of which in 2013 he was the first recipient. "Your demeanour stems not exclusively from the experience you gained on the Karwendel walls or on the great Marmolada south face, your attitude comes from an anarchic sentiment." Messner explained as he directly addressed an attentive and, we’re certain, even somewhat emotional Heinz Mariacher. "You are a typical anarchist alpinist." Messner continued "And when an anarchist alpinist enters an anarchic world (the mountains ed), he knows that it is dangerous, he knows that it is difficult, he knows that he’s far removed from all safety nets, and he experiences the mountains according to anarchic patterns. Nobody tells him what he must do and he does not allow anyone to tell him what to do. The rules he establishes are his own set of rules, and he doesn't give a damn about any other rules. He doesn't need an award, or recognition from others. All he needs is his passion and the freedom to express this love. Of course, his subconscious tells him that the freedom he demands comes hand in hand with responsibility. Which he feels all too well, when he’s up on the wall, hanging off small handholds and standing on tiny footholds, with little or no protection below him..."

Messner was obviously referring to Mariacher's great solo ascents and his mountaineering achievements and, we bet, the recipient of the prize was slightly surprised to have received this accolade. Also because Messner then confessed he’d felt a (healthy) twinge of envy for Mariacher’s climbs. But as he immediately specified, while also turning to Mariacher’s immensely talented climbing partner Luisa Iovane: "With your Tempi Moderni you really ushered in the modern era of rock climbing in the Alps. The name of that route, Moderne Zeiten, Modern Times, is brilliant. The line you chose with Luisa is brilliant. Your route finding was brilliant. You realised where you’d be able to climb and checked its feasibility, meter by meter. But not with the intention of drilling a bolt, or adding a bunch of pegs, when upwards progress was no longer possible. No, always with the aim of climbing everything free. The moment you ascended Tempi Moderni, I no longer felt envy, only even more admiration!"

This praise would have been plenty, some might have thought. But there was more in store: "What you and Luisa did together" Messner added "was beautiful, enviable, elegant and will remain in the history of mountaineering. Just like the climbs of Preuss - which were obviously much easier, of course, as he climbed in a different era - but of the same value and importance. Because your demeanour resembles his." With a touch of irony Messner then immediately added: "Paul Preuss was a funny man, a cheeky man and, for me, with unsurpassed writing skills. He also happened to be good philosopher, a great thinker. There is only one thing that the two of you don’t have in common: he coined the phrase 'Women are the ruin of mountaineering'." Hearing this Heinz didn’t wait to be asked twice and replied, while looking at Luisa: "For me exactly the opposite holds true!” For who he received the approval of the entire audience.

By the way, the conversation (ie question time) between the award recipient and the audience was also very interesting. Among the many things worth reporting is that of Thomas Hube who stated: "Heinz, you have always been an inspiration for us!" Not bad coming from one of the greatest climbers ever. Also interesting was the question of a journalist, who asked Heinz about had motivated him to end his wildest years up in the mountains. The answer: “Well, they’re not over yet! But probably when you are younger you have an inner drive that draws you towards these adventures. I now live with Luisa, I would be very sorry if something were to happen to me. I can't just leave her on her own!"

This conclusion was echoed by one from Heinz himself, who asked the audience: "If everyone had respected Preuss's ethical values, what would the rock faces look like now? How different would they be? If everyone had continued with his mentality, things would have been much more interesting." A perfect ending, in Preuss-style one might say. But also a perfect moment to then move on, have a drink and chat about what climbers inevitably chat about. Relaxed and happy for once. The pleasant atmosphere was palpable…. thanks perhaps to the magical castle?

06.04.2020
The fascinating game of climbing: Heinz Mariacher on Rude Boys
Watch Heinz Mariacher repeating Rude Boys (8b/5.13c) at Smith Rock, Oregon, USA. A video from 1987 that takes you back to the origins of this 'new climbing’.