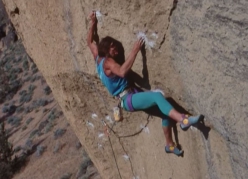 The fascinating game of climbing: Heinz Mariacher on Rude Boys

Watch Heinz Mariacher repeating Rude Boys (8b/5.13c) at Smith Rock, Oregon, USA. A video from 1987 that takes you back to the origins of this 'new climbing’.

Finding the right words to describe what makes climbing such a fascinating game isn’t easy. There are simply too many factors, too many memories and experiences. One could mention the light, the sun and the fresh air you feel on the cliff face. The freedom you get on certain hazy days and afternoons roaming between rocks and the sky. And the friends, that motley and at times somewhat bizarre climbing community that hangs out at the crag worldwide. There’s also that sense of belonging. Perhaps what emerges most of all though is the amazement and fascination that inspires people to perform the utmost when climbing. All climbers have experienced this before, at all crags, through all generations. These are moments, almost suspended in time, which are nigh perfect. Where you’re touched by the utter beauty of climbing. It’s in those moments, perhaps only in those, that once senses how climbing might be compared to a dance. A wonderful art almost which, gracefully, plays with gravity.

There are many examples of these. One of which is the following video of Heinz Mariacher climbing œ way back in 1987. The route is located at Smith Rock in Oregon, USA, at the time one of the most advanced laboratories where this "new climbing” was being experimented. The grade of the climb is 8b/5.13c, i.e. almost the apex at the time. The style is obviously that of the ‘80s. Those legendary years that shaped this sport. Enjoy.