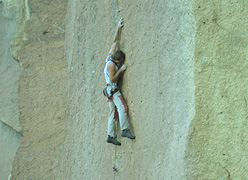 Video portrait of American climber Alan Watts, one of the driving forces behind the development of Smith Rock and sport climbing in the USA.

Smith Rock in the Oregon State Park is considered one of the birthplaces of American sport climbing. In the mid’80’s this crag was on everyone's lips as Lycra-clad climbers flocked from all over the world to test their skills on the sunshine dihedrals and smooth rock faces. These had been developed by Alan Watts who - battling against the climbing ethics - had systematically bolted the routes on rappel and attempted the moves on toprope prior to freeing them. While these practices are considered the absolute norm nowadays, at the time they were highly criticised. After our 2009 interview, here's an interesting video portrait by Matt Kleiner with the man who played a leading role in developing American sport climbing.