► News ► Climbing ► Climbing video: Nina Caprez on To Bolt Or Not To Be at Smith Rock
Versione italiana 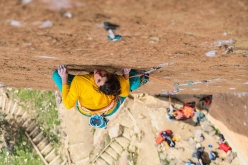 Swiss climber Nina Caprez redpointing the historic To Bolt Or Not To Be at Smith Rock, the first 5.14a/8b+ in the USA freed by French climber Jean-Baptiste Tribout in 1986.
Photo by Mikey Schaefer

PORTFOLIO / gallery Portfolio: Climbing video: Nina Caprez on To Bolt Or Not To Be at Smith Rock

Climbing video: Nina Caprez on To Bolt Or Not To Be at Smith Rock

The video of Swiss climber Nina Caprez repeating the historic To Bolt Or Not To Be at Smith Rock, the first 5.14a/8b+ in the USA freed by French climber Jean-Baptiste Tribout in 1986.

Certain routes have marked the history of sport climbing. One of these is undoubtedly To Bolt Or Not To Be, the masterpiece of technique and stamina at Smith Rock freed after 10 days of effort by visiting Frech climber Jean-Baptiste Tribout in 1986. At the time it was the hardest route in the USA and one of the hardest in the world.

The name of the route - an obvious play on words from Shakespeare’s famous "to be or not to be" - was a defiant provocation. In those days the use of bolts was hotly debated and, above all in the US, the idea of bolting a route on rappel as strong local climber Alan Watts had done went against the accepted climbing ethics.

With his first ascent the 25-year-old Frenchman Jean-Baptiste Tribout sent shockwaves across American climbing, also because the route bolted and cleaned by Watts in 1984 has remained an important testpiece, repeated rarely despite its accessibility and the fact that 8b+ no longer represents the apex of sport climbing.

After failed attempts last October, Swiss climber Nina Caprez recently managed to link the 100 moves while "dancing like I have done only a handful of times in a climbing route." Check out her story in this short film by Mathieu Rivoire.