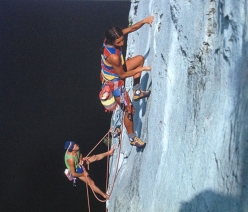 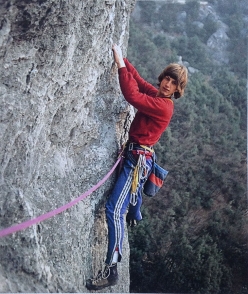 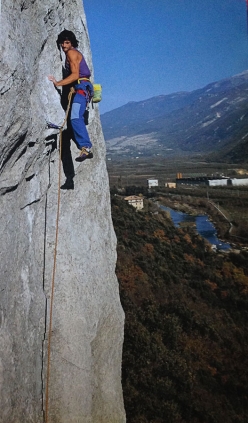 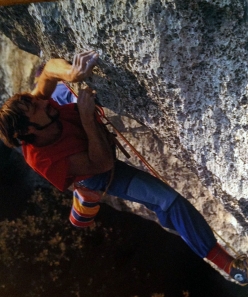 PORTFOLIO / gallery Portfolio: Free to climb - the discovery of rock climbing at Arco

Free to climb - the discovery of rock climbing at Arco

How a story begins is often a mystery even to the main actor. He could be as unaware as Isaac Newton, whose bump on the head made the idea flash through his mind that something, a force, keeps us stuck down on the ground. But can an invention happen unawares and come about by chance? Our story begins at the start of the ‘80’s and talks about the discovery of Arco and of a way of climbing which had never been seen before. It talks about, yes, an invention. It seems as though it happened by chance, but it is, unsurprisingly, combined not only with a novelty and a discovery but also with an idea of freedom.

We mentioned that we were at the start of the ‘80’s. Difficult years, where inflation went hand in hand with devaluation (of the lira), while the average salary was no higher than three hundred and fifty thousand Lira. Internet at the time was science fiction, computers were still called calculators and nobody would ever have thought that one day it would be possible to transport them in laptop bags. And to write to your girlfriend you needed pen and paper because SMS simply didn’t exist at the time. We were at the dawn of those years which went down in history books as Reagan hedonism, from Ronald Reagan, the President of the United States. But they were also the years when U2 emerged in Ireland with their "Stranger in a strange land" and "Bullet the Blue Sky".

It was also an era in which those who climbed rocks had to be mountaineers, with the obligatory below-the-knee cord trousers, woollen socks and boots. Rock faces simply had to lead to a peak which, in turn, had to be on top of a mountain. All the rest was considered of secondary importance, and served only to reach the summit.

Everything seemed to be already written: how, where and above all why. Just as the Berlin Wall, which testified a world divided into two neat, diametrically opposed blocks, seemed eternal, for those who loved to climb the rules were written and the road forward already chosen. It led naturally down a one-way street towards the conquest of mountains. We now know how things turned out, with the division of the world, globalisation and all the rest. And we also know how things turned out for climbing, how slowly but surely it became multifaceted and specialised.

But let’s not run too far ahead, let’s get back to our story. Something was in the air that had to do with all that had happened previously. One could still feel that subversion, that wind of revolution and of change that had grabbed hold of society, schools and everything to do with something predetermined and already established. Not that alpinists, the future alpinists, were revolutionaries tout court, but the desire for "change" could be perceived everywhere. It was almost a fashion. And it had touched upon, via the unaware proto-climbers, the even more unaware mountains. And so from the Dolomites to Mont Blanc, but also in California’s Yosemite, England and Germany some small avant-garde groups, almost all in unison yet autonomously, experimented with how to climb and with what was believed to be impossible. Artificial aid climbing was challenged by attempting to re-propose it free, and ascent times were drastically reduced. In short, even in the mountains there were climbers who went against the grain and attempted to, if not break the rules, at least throw them into disorder!

Imagine that scene. And imagine Arco, Lake Garda and the Sarca rock faces. But do not think of what they represent nowadays. Think instead of those who climbed exclusively on the Colodri rock face: on routes 10 pitches long, mostly aid. The best began to think of and attempted these lines as possible "free climbs." Think that there were still extremely few of these climbers around. Imagine that they were perceived as aliens (they truly were) by almost the entire population of Arco. Right, it was exactly then that it happened.

By chance a pair of climbers appeared beneath the Colodri rock face after returning from some Dolomite wall. They had gone there without a true motive, perhaps moved by curiosity, perhaps due to hearsay, perhaps they were simply transported by a desire to explore something not even they precisely knew. He was famous for his incredible and extremely fast repeats of the hardest routes in the Dolomites, for solitary forays – way beyond anything seen previously – on the massive Sella walls, and the exploration and systematic ascent of the smooth and imposing south face of the Marmolada. She was a student in love with the mountains and the great walls, and she went with him on these alpine outings which necessarily became increasingly vertical and difficult.
He was called Heinz, he had long hair and round glasses and a beard which gave him an intellectual look, as dictated by the fashion of the time. Stubborn by nature but, unlike the stereotype of his Austrian Wörgl background, he was constantly in search of something on which to vent his joy, without however letting it show too much. And since his early childhood he had established a special relationship with the rocks. This is a fundamental aspect for our story.

She was called Luisa, and with her schoolgirl pigtails looked like the girl-next-door. At first glance she seemed to have come straight out of an Andersen fairytale or Heidi cartoon. And she gave the impression, or at least wanted to give the impression, of being in the mountains by chance. However, beneath this apparent air of perennial "tourist-mountaineer" she hid a resolute character; an abnormal tenacity which was fixed on climbing the Dolomite walls, and then on joining forces with Heinz with whom she formed, and still forms, a fixed climbing couple. The story recounts of the two daring young climbers who, in that first encounter with the Colodri rock face, were defeated by the thick brambles which protected the polychromatic wall. Without regret they withdrew.

Nothing strange up to this point, the Dolomites were an extraordinary call and, at the end of the day, those mountains had always been their home. And, as we have already said, climbing combined only with alpinism and high altitude mountaineering. Nevertheless something was evidently written in their destiny, and much still had to happen between them and the rocks of Arco. How it occurred no one can really explain. At times only the stars can say why, even though the protagonists have differing visions of what happened. What is certain is that the two returned to Arco. And this time they weren’t alone. At times those in search of something new don’t even know what they are searching for, and those who want something new often meet up with others who have visions that are out of the ordinary. It was like this that, shortly afterwards and almost by magical coincidence, four of them found themselves exploring those rocks and crags at Arco on which no one had ever before thought of putting their hands. We’ve already mentioned Heinz and Luisa. And so to continue we have to introduce the other fundamental, yet unaware, inventors of the "new" which was insistently knocking on the door of their dreams.

Maurizio, alias Manolo, was already famous for his vertical adventures on and beyond the walls of the Pale di San Martino. There, with a trusted group of friends, he had undermined all the sacred rules of how to climb mountains and rock faces. He had an instinctive relationship with climbing and, if Saint Francesco spoke to nature, he spoke to the rocks. They understood each other at first touch. It’s a gift which few people have. An ability which in Manolo combined itself with an almost naive sense for life and nature. On the other hand, there must surely be a reason for his nickname Mago, the wizard of climbing, which, even today some people claim he is father of.

The fourth musketeer, Roberto, was the smallest, the youngest of this young group. The only one who lived amongst the rocks of Arco. He was perhaps the least well-known of this newly formed band of climbers, even if, in 1979, he had made the first ascent of Colodri’s "Renata Rossi" – together with Furlani, Piffer and Giacomelli and "White Crack" (in the company of Giacomelli). Two classics, the first in particular, of that era. One could say much about Roberto’s desire to live life to the full, his friendliness, his unstoppable and insatiable thirst for climbing. But, given that they are perfect for the continuation of our story, let us use the words of Heinz as a pretext: "Roberto more than any of us had truly dedicated his life to climbing. His dedication knew no compromises, had he been born in the ‘60’s in America he would have been a perfect protagonist for Kerouac".

The spirit of Kerouac, on the road. Of which the ‘70’s, and consequently the ‘80’s carried the signs. For our group the stories weren’t about tarmac freeway strips or downtown America, but wide open spaces and skies, and naturally plenty of virgin rock, with olive groves in the background singing to the breeze of the lake.

Too lyrical? Too much like an earthly paradise? No, not if you think about Arco for a moment. Not a bit if you think that they had the entire unknown limestone walls of the Sarca at their complete and exclusive disposal. What more could these unknowing new climbers want? And then, and one must never forget this, these four were "on a mission", if not for God, as the Blues Brothers sang from the big screen in 1980, then definitely for themselves. For their own happiness which, in those days – and always! – is a priceless asset! So priceless that, if you think about it, it fits in perfectly with the search for freedom which that group, and that era, had within its DNA.

In truth, someone could object now affirming that the right term they were searching for, citing Kerouac once more, those "vagabonds of Dharma" was "free" and not "freedom." But this is of little importance to our story: every invention and every true search leads to freedom. At least, this is what we liked to believe at the time, and so we will continue to say so now.

However it may be, it is incontestable that the exploration quickly began to reap its rewards. The rocky treasure and the intentions of our explorers soon revealed themselves, step by step, with the new game the four were creating. A game with precise rules which those explorers imposed right from the outset, and perfected as they imagined, to then resolve increasingly difficult problems. For problems read smooth, impossible, increasingly vertical walls, and a climbing that exceeded anything climbed so far.

by Vinicio Stefanello (from the book: Rock Master - Climbing at Arco August 2005)

>> Free to climb - the discovery of rock climbing at Arco, part 2

02.03.2017
Nomesino, the climbing gem in Val di Gresta - Arco
Planetmountain.com introduces the historic crag Nomesino in Val di Gresta, one of the most beautiful sport climbing crags in the entire Arco area in Northern Italy.