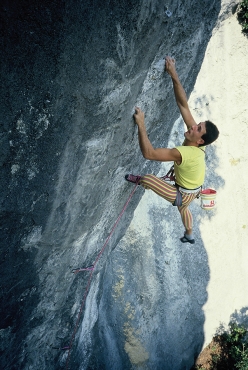 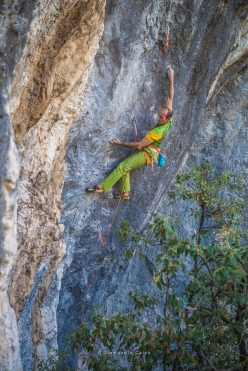 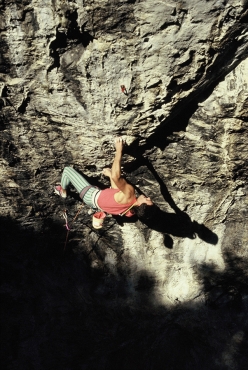 Thirty years later. The report by Rolando Larcher who, with his son Alessandro, returned to the climbs Elephant Baby (at San Paolo) and Gravity Games (at Eremo) not only to repeat these historic routes established in 1986 and the first to be graded 8a at Arco, but also to show to someone of the "indoor climbing generation" the origins of sport climbing which in the early 1980’s attempted, through trials and also "errors", to find its way.

Nothing passes as quickly as time and it seems like only yesterday that Heinz Mariacher told me about the splendidly overhanging climbs at Buoux: "magnificent rock, full of pockets!" Heinz was an inspiration who, through his words and deeds, greatly influenced my view on climbing. At the time getting information about the few existing crags was by no means easy. Yes, there were two mountaineering magazines, but they devoted little attention to "those in lycra tights ...". The best source therefore was by word of mouth, and maybe you were lucky enough to meet someone who had up-to-date information and was at the forefront of climbing at the time. I chanced upon Heinz Mariacher and Roberto Bassi.

In autumn 1986 I’d planned on discovering Buoux, the futuristic French crag. I wanted to train properly for its famous pockets and, seeing that at Arco at the time we only had slabs to climb on, seeing that the closest limestone pockets were two hours away (Lumignano) and seeing that climbing walls hadn't been invented yet, I decided to create my own gym (at home I had a pull-up bar, an edge to hang off and a home-made hang board, and as such I was already viewed as being groundbreaking).

Armed with a new Bosch drill I’d borrowed off Roberto Bassi, I chose a section of smooth, overhanging rock believed to be unclimbable and started drilling pockets, creating sequences that would link to the few natural holds. That Bosch drill was the first battery-powered ever, produced in 1985! The first pitch to be bolted at Arco with this novelty was Resting at Grotta di Toblino, in spring 1985 by Fabrizio Defrancesco and Roberto Bassi. Later that fall Bassi purchased the drill, investing all the prize money he had won at Bardonecchia for being the 1st Italian. Until then all the routes had been bolted using a manual drill, hammering and toiling away for 10-15 minutes for every bolt!

After having completed my "construction", I started trying the moves and began to understand the logic of working a route. In retrospect it seems as if all this was back in the Middle Ages, but in those days the concept of "working a work" wasn’t that clear and codified. We used to climb almost exclusively onsight and the most we did was a few laps on a route. If we sent it that was fine, otherwise we quickly moved on to another.

I quickly managed to free the climb, a burly route which required endurance, so completely different from the technical slabs we were used to. Although it was created for a specific purpose, this climb still required a name and a grade. I called it Elephant Baby, the nickname Hanspeter Eisendle ironically gave me. Seeing that this was the hardest thing I’d ever climbed, and after comparing it with some of the burley routes in Val San Nicolò, I suggested 8a. The first of this difficulty in Arco.

It was early September and my holiday in France was still a long way off and so, riding the wave of enthusiasm of this new "artificial" experience, I moved north from Pilastro delle Vergini to Eremo di San Paolo. Once again I chose a smooth and unclimbable wall, this time though it was far more overhanging and after a huge effort another training route was made. Here the climbing became even more pumpy; I needed more days to get to grips with it but in November I made the first ascent. I called it Gravity Games, because climbing on an over 50° steep face really was a new game at the time. As to the grade, I tentatively added a + after the 8a.

The two climbs caused quite a stir, partly because there weren’t many this difficult, but mainly because they’d been drilled. My aim had been to create a training route, but quite rightly my actions were criticised. At the time there was great turmoil within the climbing scene, everything was "work in progress", ideas were being experimented with because we were pioneers of this new child, which had its origins in mountaineering and which, eventually, would evolve into a sport and has now made it all the way to the Olympics. Now that everything is pretty much encoded, stories like this one make you smile, but it is thanks to these experiments, at times carried out wrongly, that we evolved and defined the accepted ethics of sport climbing.

For their 30th anniversary I rebolted Elephant Baby and then climbed it together with my son Alessandro. This was an opportunity to show someone from "indoor climbing wall generation" something about the origins of the sport.

Gravity Games didn’t need any maintenance, because in the ensuing years other routes were added nearby and the old bolts were replaced. The grade is no longer the original 8a+, as it has transformed into a 8b/b+ after an "excessive" amount of resin was added by François Legrand.

In conclusion, these two hotly discussed routes were the first of their grade at Arco and are now an integral part of this area’s climbing history.

P.S. At the end of autumn I managed to go to Buoux. It was a beautiful and fun expererience, but I also discovered a detail that Heinz had missed, namely that the end of the pocketed overhangs were all capped with hyper technical slabs, which often made fun of my onsight attempts...

I'd like to thank Zio Tibia, alias Marco Curti, for his help and also my son Alessandro. For the vintage photos: Daniela Luzzini for Elephant Baby and Marco Benedetti for Gravity Games. And thanks to Paolo "Trota" Calzà, not only for the splendid recent photos, but for his usual friendship and willingness to lend a hand.

Thanks to: La Sportiva - Montura - Petzl