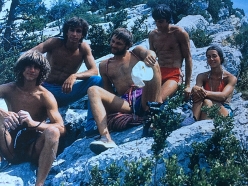 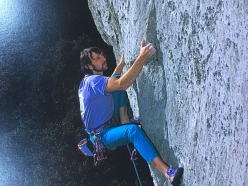 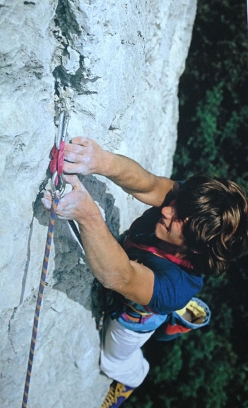 Free to climb - the discovery of rock climbing at Arco, part 2

>> Free to climb - the discovery of rock climbing at Arco, part 1

The sequences were always the same. Those which all games have in common – first of all those of children – which have climbing high as their sole purpose: discover the wall (the playground), get captured by a line (the object of desire) and attempt to climb it (to reach the goal). Nothing unusual then. In reality though we have to return to the start of our story to understand what was happening at Arco at the time. Do you remember the sacred "where", "how" and "why" of mountaineering in those years? Well, our four friends worked on those main points... naturally, but not unknowingly, overturning them all. Naturally, but not unconsciously, going beyond every stereotype.

Let’s start therefore with the choice of the place, or "where". The walls and routes, lines in jargon, which captured the imagination of our four were twenty to thirty meters high. The rock had to be compact, smooth and inaccessible to climb. Ergo: they had to be impossible by standards used up till then. Once the "beautiful and impossible" had been discovered, in comes the second parameter of the equation, the important "how" which, as you already know, had nothing to do with traditional alpine climbing. It had nothing to do with placing a "row" of pegs and climbing it "aid" by pulling on the pegs. The first "how" rule had no exceptions: one had to climb, and if the climb was to count, with hands and feet only and using exclusively what the rock naturally offered.

The second, fundamental, "how" rule was that the route had to be climbed from below. No exploration, no toprope attempt was admitted. If you fell, or if you grabbed the rope, you had to descend to the base of the route and start again. No freebies, you continued in this manner until the problem was solved, in one single, free push.

But where, our most attentive readers will now ask, is the novelty? In the end, they will object, the four did what the strongest climbers in world, those who aspired to change alpinism, had attempted to apply to the great alpine walls. One could respond by saying that it was for this reason, for its unique character and environmental and social context, that this story, like all stories, is multifaceted and complex. It is also for this reason that the inventor does not always find what he is looking for, but this certainly does not mean that he will not invent and never find anything new.

Or rather, in attempting to respond, one must immediately analyse why. Perhaps, as some recount, it all started from the idea of transferring those new experiences and super difficulties to the mountains. Or perhaps, seeing that climbers in other parts of the world moved in the same direction as our exploratory team, it was simply already written in the genes of those years. Or, as Guccini sang in "Vedi cara", one could say that "It’s difficult to explain... it’s difficult to understand... if you haven’t already understood." It is better therefore to continue, also because our four, at the time, certainly didn’t lose themselves in smalltalk. And, faithful to the unwritten rule that without action there can be no climbing, they continued their vertical exploration ceaselessly, with a passion that perhaps still surprises them now. Although more could be added, we’ve already talked profusely about the "where" and "how". As for the "why", we hope that everyone will search for their own. The moment has now arrived therefore to talk about this special "spice" that the four added to their way of interpreting climbing.

As you now know, the limestone explored by our four at Arco distinguished itself for its compact vertical nature and solidity, but also for the absence of cracks or natural weak points which enable pegs to be placed. It therefore represented a new challenge, often suffered, to find technical solutions, for example, the use of bolts, the special and extremely safe expansion bolt which is inserted into a predrilled hold and required hard work and hammering.

And so it was that whilst rotating blades and intergalactic "Ufo Robot" missiles signalled the invasion of Japanese cartoons on Italian TV screens, that Heinz and Roberto placed the first bolt at Arco on the route "Sullo specchio delle mie brame" (a variation of the above cited "Renata Rossi" at the Colodri).

We will not bring up any of the debates that accompanied and always will accompany the use of the bolt. With the benefit of hindsight it doesn’t seem that important to us. Suffice to say that without the use of the bolt there would be no climbing at Arco, at least, not as we now know it, or for that matter in many other places. What needs to be highlighted though is the parsimonious nature with which they used the bolts, which can be placed anywhere without distinction. It was exactly this, the "salt" (with a little "pepper") that they added to their vertical experiments.

And so the method, like the intentions, took on form and was consolidated. First came the vision of the line, the first creative act of the project. Then they bolted the route from above, but without attempting the moves or improving the holds. And then came the ascent, always and exclusively from the ground up (apart from Luisa, the only member exempt from this rule), with an obligatory return to the start every time the game of free climbing was interrupted.

This is how our four learned to fly. Up high towards their goals. But also down low, overcome by the force of gravity and held by the providential rope every time they committed an error. Great long falls if you think about how few bolts they placed, and a big novelty if you think about their alpine background which absolutely did not contemplate the possibility of falling in the mountains.

In the meantime, Manolo, Roberto, Heinz and Luisa were joined by Bruno from the Val di Fassa, convinced by Heinz to momentarily put his mountain adventures on hold. He was to become famous, Bruno was, for more than just his fame of ... "Bear Bruno" but also for his literal interpretation of "He who flies is worth it, he who fails to fly is vile". This tongue twister, in vogue during those years, says much about the possibilities created by this new climbing.

The game, in effect, was intense and fun. They climbed free of everything, even of time and the early morning wake up calls of mountaineering. They were the undisputed masters of what they were creating. And day by day they invented a new form of climbing. They continued to discover treasures. To resolve increasingly difficult and beautiful routes. And then the game began to spread. They began to expand the "where" from the Colodri to the Spiaggia delle Lucertole on the lake shore. From the San Paolo wall to the Gola di Toblino. In doing so they set the borders of a new territory which, with Arco as its fulcrum, grew incessantly and was ncreasingly bound to that particular way of interpreting the rocks and climbing. From 1983 to 1985 the Swing area, the Pilastro delle Vergini, Gri Grill and the Spiaggia, became the manifesto of the hardest climbing possible in Italy and at the forefront of climbing worldwide. The first ascent of Dracurella, Nisida, Indiana Jones, Tursen and Sfinge (by Manolo); of Superswing, Tom & Jerry, Pipistrello and 007 (and Heinz); of Tom Tom Club (by Heinz and Bruno); of Lucky Strike (for Roberto); and the repeats of Nisida and Tom & Jerry (for Luisa) are some this group’s highlights.
These are all routes which represented not only the solution to difficulties initially perceived as insurmountable, but also a new consciousness, a new way of living and interpreting climbing. A laboratory of climbing as an art and dance was born. An activity which went beyond the borders of the walls of Arco and projected them into the future.

Borrowing the name of one of the new routes given by Aldo Leviti and Renato Bernard, one can say that that feverish season of activity opened New Horizons to the climbers. Ironically, the very crag which hosted the route with one of the most evocative and significant names was, a few years later, the only area to be closed by the landowners. One of destiny’s tricks or of horizons still too far afield?
In the meantime the road to Arco had been etched in the travel book of all the new generations of climbers who began to arrive (and continue to arrive) from all parts of Italy and the world. Arco and the valley had found their vocation. They had chosen the direction, that of climbing, which they continue to follow even today.

Heinz Mariacher, Maurizio "Manolo" Zanolla, Luisa Iovane, Roberto Bassi and Bruno Pederiva, the protagonists of our story, had found their path, too. After a magnificent season of discovery and exploration, those chance inventors, by now certainly more conscious and free to climb, shifted their attention to other rock faces. Towards other experiences, perhaps in search of those unrepeatable dreams they had experienced between the lake’s rocks.

They had opened the ball, and the doors, for all other stories that followed on those walls. They had rendered their dreams possible. And others continued, and still continue, on those very same rocks to search for and live out their dreams. In pole position was Roberto Bassi, the only member of the group who, until destiny stopped his course and young life, never ceased to climb those rocks.
And it was Roberto Bassi, who together with Luisa Iovane was one of the main players of the new season, who dedicated himself to competitions, which in 1985 appeared on the climbing scene. But that is another story. Or rather, it was an intuition, programmed, which stemmed from an invention. And this too, as we will soon see, had Arco as its main actor...

by Vinicio Stefanello (from the book: Rock Master - Climbing at Arco August 2005)

>> Free to climb - the discovery of rock climbing at Arco, part 1

02.03.2017
Nomesino, the climbing gem in Val di Gresta - Arco
Planetmountain.com introduces the historic crag Nomesino in Val di Gresta, one of the most beautiful sport climbing crags in the entire Arco area in Northern Italy.