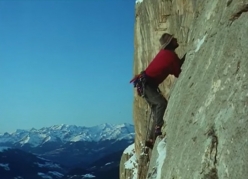 Return to silence. Rock climbing in '90's according to Heinz Mariacher and Luisa Iovane

When climbing resembles poetry: scenes from "Ritorno al silenzio”, the 1992 film about climbing in the Dolomites starring Heinz Mariacher and Luisa Iovane.

At times just a few images suffice to awaken distant memories. Like this short clip, staring Heinz Mariacher and Luisa Iovane climbing up Sass de la Crusc, also referred to as Heligkreuzkofel. The following clip contains just a few scenes, little more than 3 minutes, and is taken from "Ritorno al silenzio” - Return to silence - the 30 minute film directed by Mariacher and Sepp Wörmann that recounts the beauty of climbing in the Dolomites back in 1992.

At the time a new form of climbing, i.e. sport climbing, had already begun its small revolution, thanks also to Mariacher and Iovane. The first-ever organised climbing sport competition had already been held at Bardonecchia. The Arco Rock Master was already a legend, and everything we now know still had to happen. At the time the general belief was that climbing competitions would have "unshackled" the competitive aspect off mountaineering and rock climbing. Perhaps this is another reason why Mariacher introduces the video as "an attempt to express how I visioned the future of climbing in the Dolomites. It's not about the grade, it's about what you feel…"