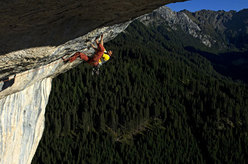 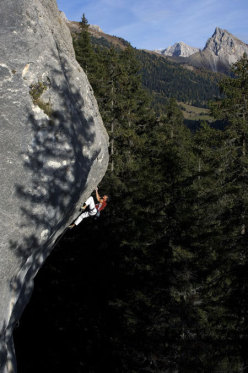 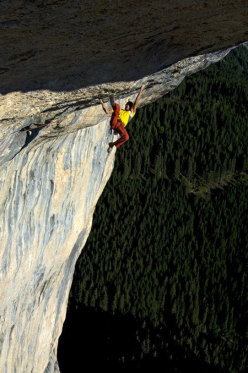 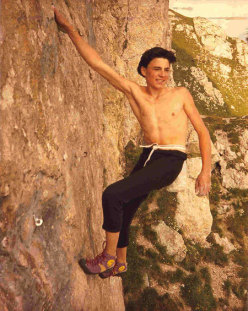 One day Heinz opened two new routes in Valle San Nicolò (Val di Fassa, Dolomites) and 22 years later he gave the route to Mario, who freed them. This is the story of "Alice e l'imperatore" and "Basic Instinct", told by Heinz Mariacher and Mario Prinoth.

One could say that this is a story about a present. No, two presents, which an experienced climber gave to a younger friend. The "old" climber, let's call him this to distinguish the two, is a certain Heinz Mariacher, alias one of the "inventors" of modern sport climbing. The "youngster", or rather, the younger of the two, is Mario Prinoth, someone who silently but surely has amassed an impressive number of ascents over these years - see our recent news item for more. But let's have a closer look at the presents. The first is called "Alice e l’imperatore", Alice and the Emperor, while the second needs no translation: "Basic Instinct". It goes without saying that both routes are beautiful and both were discovered and bolted more than 20 years ago by Mariacher and freed this autumn by Prinoth. "Alice" is a great pitch, hidden high in the wonderland forest in Val San Nicolò. The route is dedicated to a girl who perhaps won't become a climber because she was unlucky enough to end up underneath that overhang at the tender age of 6 months, while Heinz, the "Emperor", was making his first attempts. At the time no one could have thought that Alice would turn 22 years of age before the route was to receive its first free ascent...
"Basic Instinct" is the enormous overhanging face, smooth as a mirror, which dominates the entrance to the valley and which culminates with an "awesome" roof which one cannot fail to notice. We'll provide no other information, also out of respect towards an old valley tradition. We're certain that those interested enough will know how to locate these two gems. What we do offer though is a sequence of stories told by the two protagonists themselves. We're certain that you'll not only reach the end of them but that, like us, you'll appreciate this little present which Heinz and Mario have given us. A belated Christmas present which (perhaps you've noticed?) we're publishing over this festive period. These are small, great "stories nestled beneath the Christmas tree" which talk about the love for the mountains, climbing, mountaineering and skiing... in short, they all talk about the passion we all share. Enjoy the read!

Valle di San Nicolò towards the end of the 80's: it was no longer that easy to be a pioneer. Yes, one could train harder, lose another couple of kilos and push the grade up to 8c/9a. But this was no longer the work of pioneers, it was something cut out for true sportsmen, super disciplined and methodical. In any case, ever since the outset of competitions climbing outdoors had become something relative. At least, that's how I viewed things at the time. And view things even now. Because it seems too obvious to me that the best "comp climbers" can do anything they like at the crags and I don't share, even today, the idea of a "rush to achieve the next supergrade" as a sort of alternative competition for those who don't like to confront themselves directly with others. Climbing at the crags simply returned to how it was in the beginning, when it had no official worth. What was important was the search for one's personal limit and the only admirer who counts is the one everyone has within themselves.

But let's return to Valle di San Nicolò at the end of the '80's: after Kendo and Looping I felt I still hadn't reached my maximum. Fulfilling one's potential is a dream which exists in all fields, not only in climbing, and I believe it's this which prompted man to leave his cave one day. In my case I wanted to leave the forest, where we had lost ourselves for a number of years and I dreamt about an awesome route, superbly exposed and naturally super difficult. Super difficult isn't something easy to come by for someone who climbs by following the instinct and motivation on a given day, instead of training and preparing themselves seriously. Instead of a Campus Board, weights and other methods, my training was limited to repeating the usual routes, such as Kendo three times in a row followed by a couple of attempts on a new project, before returning off home for a nice flight with a delta-plane.

An awesome route... I felt like Rocky Balboa who went to Russia to train in the Siberian forest, working as a woodcutter and shouldering extremely heavy tree trunks. Instead of the trunk I carried a tremendous rucksack, with a petrol drill which weighed 10 kilos all by itself! I managed to stand upright, only just, yet I had to ascend a nigh vertical rock face, balancing carefully on the tufts of grass which miraculously held in place. I followed the tracks of extreme chamois for more than an hour and got there, exhausted before the real toil began: equipping an 8m roof with the aim of placing as few bolts as possible. Then I had the to free the earth from the pockets, isolate them with sikka so that water wouldn't filter through, and on like that. This work continued for three weeks, I'd never worked that hard as an Alpinst!

The result was a fantastic route which mixed stamina with a couple of bastard moves. Unfortunately, in the end I only managed to convince Luisa to belay me a couple of times, because the walk-in was a pain-in-the-arse and also dangerous. I clearly remember one good attempt, I'd climbed through the overhang, then the roof and suddenly I was there, unexpectedly, beneath the final headwall which I'd never attempted previously, believing it to be easy.

Right in that moment I was betrayed by my instinct and I did everything wrong and, completely pumped, I was forced to give up on those final meters. "I'll do it next time" I thought, but a few days later, on Alice, my project in the forest, I heard a strange sound. At first I thought a hold had broken, but instead it was the joint capsule in my middle finger! That's how my post-Kendo dreams came to an end... After an 8 month enforced rest the worst had passed, but my finger was no longer what it once used to be. So from one year to the next I hoped to return to try those projects, but my instinct took me elsewhere...

At times I thought about giving those projects to some younger climber, but I hadn't completely abandoned hopes of returning there myself, because deep down I'm an ever-optimist. Until no one noticed those hidden treasures, why reveal them? Only when Mario Prinoth one day kindly asked me whether he could attempt Alice did I realise that in the meantime twenty years had passed! So I didn't only give him Alice but also Basic Instinct, which seemed to me the right name for the awesome route, and anyway, it sounded decidedly better than "Rocky Balboa".


THE TIME IS RIPE by Mario Prinoth
I'd like to talk about the chance events which led to this article. In effect a series of fortuitous events, like the simple request for a photo, can provide you with the opportunity to get to know a historic area better, as well as that of a small personal story. I wasn't much older than 12 when my brother Luca took me up my first mountain route, namely "Roberta 83" and my clearest memory is of him climbing barefoot, perhaps because he wanted to emulate the best climbers of that period.

Years passed and my climbing ability finally enabled me to to do what I had only ever dreamt of, and which in that area and in those days was considered a sort of "rite of passage": go climbing in Val San Nicolò. Fleeting encounters with the legends of those days, such as Heinz Mariacher, Luisa Iovane and Bruno Pederiva, who not by chance haven't disappeared without a trace but continue even today, were a sort of apparition for young, inexperienced climbers like us. They almost aroused some form of reverential fear. When I think about it now it makes me smile, but at that time the emotion of watching them climb was comparable to what I imagine a young footballer feels when he sees his favourite player close up.

Val San Nicolò evolved throughout the years but it has always remained a historic crag, thanks to the its beauty, the fantastic routes and and because when you climb there you can almost feel, sense that it is here that the history of sport climbing evolved, thanks to the numerous climbers who dedicated their lives to this. Over the years above all Heinz and Bruno bolted numerous pitches, many of which have already been freed, while others are still awaiting their first repeat. Amongst those who climb here the rule still applies that those who equip a route have a sort of right to free it, unless of course he decides to "offer" it to anyone else. Which means allow him to try and, eventually, free it. And it's here where the experience began which I'd like to tell you.

For me Val San Nicolò is still a safety-net in summer when, because of work commitments, I can't travel further afield. Last summer I was drawn in by a magnificent slab which mirrors the "Sasso delle Undici" and which is followed by a gigantic roof. Despite knowing that a route equipped by Heinz existed up there, I'd never spoken to him about it, perhaps out of some form of respect since I didn't know what he intended to do with it. One day though, while descending from a climb, he spoke to me about it and his few, efficient and pondered words made me understand that the time had come for someone to go try it. I was immediately enthused.

A few days later, together with my usual partner Stenico, I found myself engaged on something particular, once again far removed from normal standards. I don't want to talk too much about the technical aspects of the route, all I want to say is that the pitch starts from a ledge, is graded 8b/c and is 45m long. The first section is typical Val San Nicolò style, long moves up pockets which scatter this limestone, and this is followed by a large roof with athletic, airy and spectacular moves. It's almost a game, dancing more than 100m above the ground and it made me feel the same emotions I felt more than twenty years ago..."

For me it is these sensations, which repeat themselves and which manage to unite past and future generations, which are the strength and essence of climbing. These emotions are timeless and continue, now and for always, to feed from the same love.