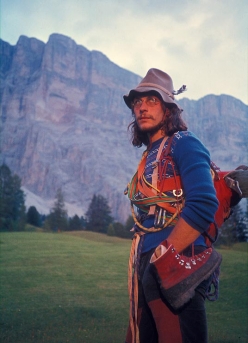 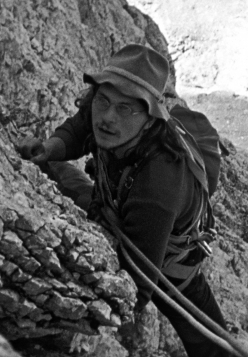 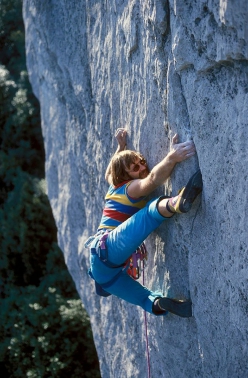 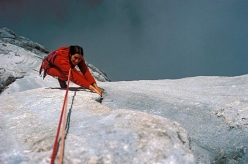 So the Paul Preuss Award 2020 goes to Heinz Mariacher. And, perhaps like never before, we feel that an award as prestigious as this one goes to precisely the right man, mountaineer and climber. Yes, because if in people’s imagination Paul Preuss has come to represent absolute purity, a visionary free-soloist whose by fair means, no-compromise ascents never underestimated the mountains, then Heinz Mariacher has succeeded in interpreting this approach in modern times, while maintaining a uniqueness and personal vision that has evolved over time.

He is a freethinker, Mariacher is, and at the same time a sort of climbing anarchist. Ever since early childhood. Ever since that first time when, unaware of what he was letting himself in for, he left home on his bike, all alone, to reach a distant mountain face and climb a 5th grade route up Rofanspitze. He knew nothing about that loose and difficult route. Understandably so, since he had taught himself how to climb and was a mere 11 years old! He didn’t know it back then, but evidently he was predestined to become a climber. A fate that, coincidentally at first, he faced perfectly on his own.

In the early 70’s therefore, this just over 18-year-young Austrian - with his slight intellectual and slight hippy air - repeated many of the most difficult routes solo. From Rebitsch on Fleischbankpfeiler to Schmuck on Fleischbank. Down to the Dolomites, where he waltzed up the Cassin, Comici and Egger routes on Tre Cime di Lavaredo, up the Vinatzer on the South Face of Marmolada and Via Lacedelli on Cima Scotoni. Back then these ascents were as out of the ordinary as groundbreaking. Also because of the style in which they were carried out.

A shining example is the aforementioned Lacedelli on Cima Scotoni, one of Mariacher’s solo ascents that he remembers most intensely, both due to the spirit and the ambient in which it was carried out. "At the time we knew little or nothing about that route. Just that it was very difficult and that three people standing on each other had been needed to breach the crux. Attempting it solo was an irresistible challenge, so that weekend I avoided my usual climbing partners and set off alone for the Dolomites. I self-belayed on the first pitch... then never again." This was back in 1974. One, or rather, three mountaineering eras ago. But back then Mariacher was already thinking about free climbing, refuting aid climbing altogether and, much like Preuss, believing that difficulties had to be overcome using one’s own strength, without resorting to aid, during both the ascent and descent.

In order to complete the picture, it’s worth noting that Mariacher is a rebel at heart. Who thinks outside the box. Who experiences climbing "Not only as a challenge or competition, but also as fun". Furthermore, he doesn’t believe in the concept of "conquering the Alps", nor does he actually want to conquer anything at all. His way of taking to the mountains goes well beyond any preconceived ideas. And it attempts to interpret that desire for freedom, that need to take things one step further that is so typical of those '70s. In 1979 he did just this on Via Conforto - Bertoldi. Without a shadow of doubt one of Mariacher’s most important solo ascents. Mentally, but also due to the way in which it came about.

On that day, Mariacher explained "I went bouldering above the Falier hut but after a while, it must have been about 2:00 pm, I got bored. So I decided to climb the Conforto crack. I hadn’t climbed it before, all I’d done was read the route description in the Pellegrinon guidebook. I was wearing a T-shirt, shorts, that's it." So Mariacher had nothing with him, neither pegs nor a rope and, in line with Preuss’ spirit, he would have to "be able to climb down what he had just climbed up.” It goes without saying that all of this, even that impromptu and instinctive decision to climb the Conforto crack that afternoon, necessitates a level of skill and preparation that was out of the ordinary. On that particular occasion, Mariacher recounts: "once beyond the point of no return, I had to get inventive to climb past the chimneys covered with a layer of thin ice....".

Perhaps though one risks not fully comprehending Mariacher's "sense of climbing" if one omits the fact that he was a flag-bearer, was one of those who explored a new way of experiencing rock climbing. In the 70s and throughout all of the 80s this quest explored and overturned the vertical world, the perceived idea of climbing difficulties, and above all the concept of free climbing. Mariacher called this "collective" journey his own and interpreted it with a good degree of inventiveness and vision that have left an indelible mark.

Tempi Moderni is a case in point, first ascended on the South Face of Marmolada with Luisa Iovane, another charismatic figure as well as life and climbing partner. The climb is a true programmatic manifesto of a new style of climbing: climbed free and ground-up, it represented an absolute apex in terms of style, "by fair means" and beauty. It is this vision and quest that has always guided Mariacher. From his discovery of the crags around Arco to those nestled deep in the San Nicolò valley, to the great mountain faces up in the Italian Dolomites. It is this form of climbing that has always truly interested him. A form of climbing immersed in nature that seeks its own spaces, solitudes even, far removed from the crowds. It’s a climbing that is happy and free, perhaps just like the one dreamt of by Paul Preuss.

06.04.2020
The fascinating game of climbing: Heinz Mariacher on Rude Boys
Watch Heinz Mariacher repeating Rude Boys (8b/5.13c) at Smith Rock, Oregon, USA. A video from 1987 that takes you back to the origins of this 'new climbing’.