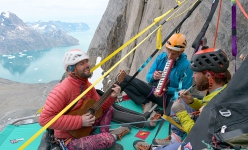 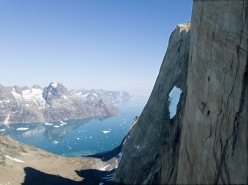 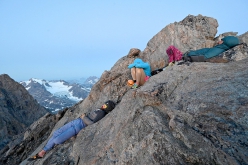 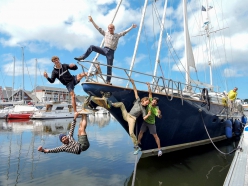 Belgian climbers Nicolas Favresse, Sean Villanueva, Jean-Louis Wertz are currently climbing in Greenland with Aleksej Jaruta from Sweden. After having reached the island by sailing boat from France, the team managed to establish the first route up the steep Siren Tower.

We are all good and healthy here!! We find life on land to be more stable than at sea, but way rougher than on a luxurious yacht. We have to cook while sitting in the dirt and take showers in cold glacial streams! Luckily we found lots of nice boulders to recover some of the shape we lost during the two weeks at sea. With our crimp strength growing back we could finally envision tackling the acoustic of the steepest big wall here! To our knowledge no one has climbed it before, so the unknown fuelled our souls with excitement.

Due to the steepness of the wall and its thin cracks we were certain we were in for an extreme free climbing challenge, so we brought enough food and water to potentially spend ten days on the wall. But as we approached the steepest part of the wall, the cracks kept delivering incredible holds, making the climbing exceptional but not as hard expected. It wasn't easy either, but four days sufficed to free the entire wall, leaving us enough food to enjoy a couple of extra days on the wall to play music, eat popcorn and climb a few additional alternative pitches to our new route.

We also had the great surprise of the visit of our friends Matteo Della Bordella, Silvan Schüpbach and Symon Welfringer, who completely by chance came to the same big wall arena as us with the help of their kayaks. A few days after us, they also opened a new line next to ours, and so we celebrated the two fastest ascents of the wall with the luxury of fine wine and homemade Belgian fries! Some days later, with batteries fully recharged, we split into two teams to open two new routes on a wall named Aurora. We were impressed with the quality of the rock and the positive surprises every time we thought we’d got lost in the ocean of granite.

Our friends are paddling back to civilization, so we are sending the news with them, hoping they will reach you. We haven't met any polar bears or salmon yet, but we have faith we’ll see them soon! We hope to climb a couple more walls here before taking our kayaks and exploring the area deeper.

23.07.2014
Greenland 2014: updates from Nicolas Favresse & Co
Nicolas and Olivier Favresse, Ben Ditto and Sean Villanueva report about their first climbs and the start to their Greenland & Baffin Island expedition.

09.09.2010
Favresse, Villanueva and Ditto, final routes in Greenland
Nico Favresse, his brother Olivier, Sean Villanueva and Ben Ditto are now sailing home after a final flurry up the granite walls of Greenland.

07.07.2010
Greenland 2010, two new routes for Favresse, Villanueva and Ditto
On the Red Wall in Greenland Nicolas Favresse and Ben Ditto carried out the first ascent of Seagull’s garden, while Olivier Favresse and Sean Villanueva established the nearby Red chili cracker.