"The team on the summit! Bob Shepton was also an undeniable team member and we shared this moment with him through the radio." Sean Villanueva, Nicolas Favresse, Olivier Favresse and Ben Ditto on the summit of The Devil’s Brew (850m), Seagull wall, Greenland.
Photo by Favresse archive 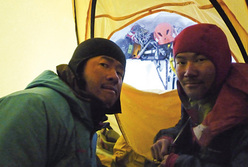 Two prizes awarded last night in Chamonix during the IXX Piolet d'Or: Mount Logan in Canada by Yasushi Okada and Katsutaka Yokoyama, and the Big Walls in Greenland by Sean Villanueva, Nicolas and Olivier Favresse and Ben Ditto.

Like last year, the Piolet d'Or was awarded to various climbs: the long route up the South East Face of Mount Logen in Canada (2500m and 4 bivouacs to 5959m) established by the Japanese Yasushi Okada and Katsutaka Yokoyama and the nine big walls along Greenland's coast first ascended by Sean Villanueva, Nicolas and Olivier Favresse and Ben Ditto, with a direct start from the yacht skippered by 75-year-old Bob Shepton.

The Jury was faced with a difficult task and this explains why Greg Child, Enrico Rosso, Yannick Graziani, Simon Anthamatten, Michael Pause and Hiroshi Hagiwara decided to awarded the Piolets to two beautiful adventures, apparently so different, but nevertheless generated by the same overpowering passion for the vertical. In fact, the Jury underlined this feeling in their motivation: "These diverse ascents were made by experienced alpinists, on low or middle altitude peaks, featuring exceptionally high levels of technical competence. There was an overriding sense of team spirit and having fun."

WINNERS 2011 - JURY MOTIVATION
Greenland Big Walls Expedition
This was innovative big wall climbing with a difference - in excellent style, using neither bolts nor pitons, and traversing the peaks after the climbs. In the popular sport of big wall climbing, this showed that it is possible to make these ascents completely clean. In addition to a high technical level, the team approached by yacht into unexplored areas and showed huge camaraderie.
by Sean Villanueva, Nicolas & Olivier Favressse (Belgium) and Ben Ditto (USA), boat captained by Bob Shepton (UK - 75 yrs).

Mount Logan South East Face
This was a new route on a very remote 2,500 metre face, undertaken with meticulous preparation. The climbers travelled over a wide area to find routes for acclimatisation, and only embarked on the route after careful planning to avoid objective danger. The ascent epitomises climbing in modern alpine style, travelling at speed on unknown terrain for a route one and a half times the height of the Eiger North Face. The pair completed the long connecting ridge to the East summit.
by Yasushi Okada and Katsutaka Yokoyama (Japan).