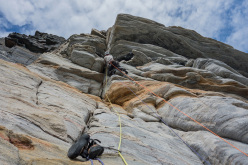 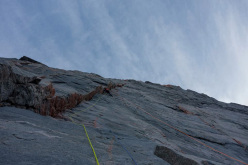 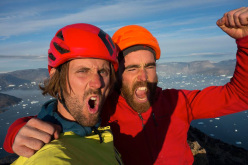 Nicolas and Olivier Favresse, Ben Ditto and Sean Villanueva report about their first climbs and the start to their Greenland & Baffin Island expedition.

We are sheltered in a nice little bay behind Umanak island. For the past three days the wind has been blowing, making up for some nice sailing adventures. A few days ago, our peaceful anchorage by some steep walls became more like a washing machine, throwing the boat in all directions. Everything was fine (except for a not so restful night) until the shore became so close our captain called for an extreme exit of the anchorage as the boat started bouncing on the rocks. I have to say the fjords around here don't offer many good options for safe shelters. But Bob seems to be quite excited (a bit like us with a first ascent) to challenge his boat for the sake of bringing us to a climb or just discovering new anchorage to report to the sailing community.

We did put up a couple new climbs on a very nice 500m rock feature on the south East buttress of Qaqugdlugssuit. Although very close to the wall we climbed previously, the rock was very different with nice rounded cracks which in the steeper section tended to disintegrate into kitty litter. What's pretty unique about climbing here is that with the 24 hours of daylight there seem to be never any hurry. We sleep when we feel like sleeping, we wake up when we feel like waking up and climb when we feel like climbing. The most intense moment of the climb was probably when we crossed an overhanging black dyke. The rock of a total different constancy was totally disintegrating making it very hard to trust anything. Only faith and lack of rational brain thinking could bring us through this type of sections. The views in the low midnight sun were again outstanding with the company of the birds and whales fishing their way around the fjords.

Beside that we are still waiting for the ice to melt on Baffin Island. According to the ice charts there is a very good evolution but the fjords are still completely blocked with fast ice. There is a good chance we could cross around next weekend... Meanwhile our program revolves around bouldering, jamming, fishing, naturism, eating and sleeping... We are suffering!

Greetings from Greenland!
The Wild Bunch