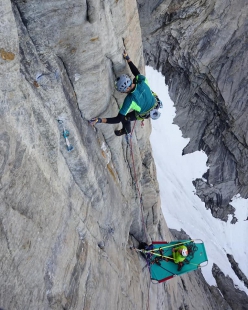 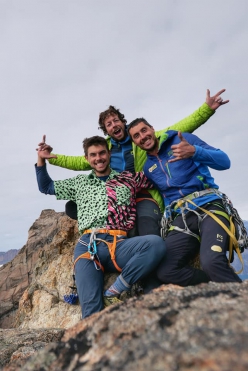 A strong Italian-Swiss-French trio comprised of Matteo Della Bordella, Silvan Schüpbach and Symon Welfringer has succeeded in establishing and freeing Forum (840m, 7c) on the remote Siren Tower in Greenland. This major big wall was reached by fair means after kayaking a distance of 170km for 5 days.

Seven years after establishing The Great Shark Hunt on Shark's Tooth in Greenland, earlier this summer Matteo Della Bordella from Italy and Silvan Schüpbach from Switzerland returned to the largest island in the world, this time with French alpinist Symon Welfringer for another expedition that combined kayaking with climbing.

After a delayed departure due to Covid restrictions, from Tasilaaq the trio used kayaks to paddle about 170 km in five days to reach the area called Mythic Cirque. Here they set up their base camp below the main objective, a huge granite spire called Siren Tower.

Climbing big wall style, ie climbing throughout the day and descending to their portaledge at night, the team spent 5 days establishing Forum, an 840m line which followed a series of obvious cracks before breaching the greatest difficulties on the overhanging headwall. They topped out on day 5 and and on day 6, just before the bad weather set in, they managed to free those pitches they had forged with the use of aid. The crux is a sustained 7c crack established by Della Bordella and freed by Welfringer. According to Della Bordella the new outing was "psychologically somewhat difficult due to the unobvious gear placements, with some beautiful vertical and overhanging pitches."

Practically the entire route is protected with trad gear, while the abseil belays were backed up with pegs. Only two bolts were placed on the entire route, one for the portaledge camp and another to protect a section on a pitch that was subsequently bypassed by climbing further to the right.

After the 21-pitch first ascent the trio returned to civilisation by kayak and Welfringer stated "This was my biggest experience in Bigwall climbing and I really loved the process. For sure, opening hard pitches with sometimes very doubtful protections in the middle of the Arctic ocean is something I'll not forget that soon."

It is worth noting that Della Bordella, Schüpbach and Welfringer were not operating alone in the area as, by pure coincidence, they encountered the Belgians Nicolas Favresse, Sean Villanueva, Jean-Louis Wertz and Sweden’s Aleksej Jaruta on Siren Tower. This international team had reached the mountain by sailing boat after having set off from France in early July and, climbing a completely autonomous and independent line, established the first route up the face and on the mountain just two days before Della Bordella, Schüpbach and Welfringer. More details about both climbs will follow in due course.