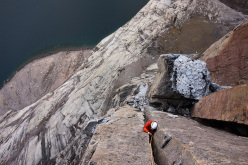 Nicolas Favresse offwidthing his way up the first ascent of "Walking the plank" at Gibbs Fjord. A cloud of snowy mist covered the whole face with a thin layer of snow making it very exciting to free climb.
Photo by Nicolas Favresse archive 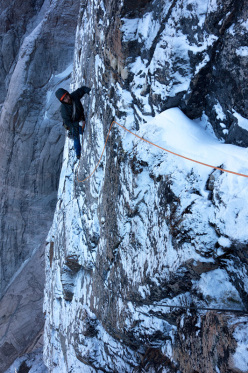 Never thought it possible to free climb in these conditions! Everything slips off while your fingers and the feet get totally numb… This is next level free climbing and it's a lot of fun only if you can wait for the blood to come back. Sean Villanueva following Nicolas Favresse on the first ascent of "Walking the plank", Gibbs Fjord
Photo by Nicolas Favresse archive 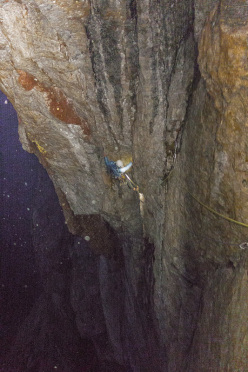 Olivier Favresse following Nicolas Favresse on pitch 23 of Shepton's Shove on the SE Pillar of Walker Citadel, Sam Ford Fjord - it's 1 am and a snow storm hit us again on our third attempt! Fortunately as we pushed through it, the sky cleared up and we could finally finish it! Yeah! This is our first climb in Sam Ford Fjord, Baffin Island;)
Photo by Nicolas Favresse archive 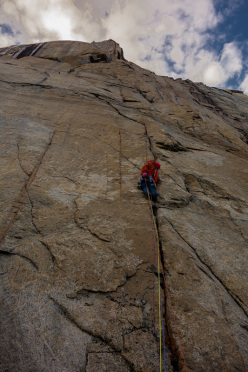 Greenland 2014 and Baffin island: climbing at Gibbs Fjord by Favresse, Ditto and Villanueva

The final report by Nicolas Favresse about the Greenland 2014 expedition, carried out together with Olivier Favresse, Ben Ditto and Sean Villanueva. This final update includes the exploration at Gibbs Fjord, Baffin Island

Third and final update by Nicolas Favresse about the exploration of Greenland's coastline together with his brother Olivier, Ben Ditto and Sean Villanueva. This final chapter takes place in Baffin Island's Gibbs Fjord and talks about a close encounter with a polar bear and new routes. The full list of routes is published at the end of the report, it's worth noting that all climbs were put up without a single bolt or peg.

How could we describe the feeling of taking our first shower in over two months? Mmmm...Well yes ... We have just hit civilization in Greenland. These last 3 weeks has been very exciting in many ways! Adventurous climbing, a close polar bear encounter ( without anything to defend ourselves) and a very scary crossing back to Greenland which included a strong storm with snow and huge waves! On this kind of trip the adventure never seems to end until you are back under that hot shower. It does make the shower so much better!

So 3 weeks ago we sailed away from Sam Ford Fjord to explore Gibbs Fjord. Finally the intense weather conditions in Sam Ford Fjord, eased off allowing us to see some blue in the sky. It was very enjoyable sun bathing on the deck while sailing around enjoying the magical scenery of mountains, big walls, glaciers and Icebergs floating around the Fjords. However, it being early september, the temperature was decreasing day by day proportionally to the area of our bodies on which we would apply sunscreen. It feels amazing how you can sail for days in these waters and see absolutely no sign of humans. At this stage we had to be careful to spare the use of the motor in order not to run out of fuel. So we sailed even when there was not much wind; slicing the water slowly but smoothly as we were scoping around. Finally we found the business : Gibbs Fjord is full of impressive walls mostly untouched. Quickly our attention was caught by a steep and long aestetical North facing arete. There were lots of south facing walls but for some reason the most appealing objective for us was a North face which we knew would be cold to free climb at this time of the year.

The next day Sean and I set off for it while Ben and Oli decided to trade the committing adventurous climbing for a nice hike to the top of some mountains. The blue sky turned grey again with a big band of mist which quickly spiced up the climbing as snow flakes were flying around. In a couple hours the wall was covered with a very thin but rather sticking layer of the white stuff. Fortunately the climbing was steep, so on the bottom section of the wall it hadn't accumulated too much and we enjoyed some of the best rock quality we encountered on this trip. But as we went higher things got more interesting. The rock was completely plastered! It reminded us the famous Scottish mixed climbing mecca Ben Nevis except we were free climbing. Fingers were jamming in snowy crack and our numb feet constantly slipping away. I never thought it would be possible to free climb in these condition! Everywhere we could rest we had to stop to warm up our numb fingers and even for the easiest move it was a challenge not to slip and fall off. It was tough but the atmosphere so magical we kept going. Thankfully the sky cleared up and, since the last 300m had been above the mist, it was a relief to finish the climb finally in decent condition. As it was getting dark, we reached the top again of a beautiful virgin feature and enjoyed the satisfaction and the unique scenery of Gibbs Fjord. If I could chose, I would never free climb again in these conditions but at the same time it was such a unique experience that I will never forget it.

While Sean and I were struggling with cold and snow Ben and Oli were strolling in the sun enjoying what they thought to be a safe way up a mountain. For the past month we hadn't seen any more polar bears so slowly we started leaving the gun behind when we went on land. Ben and Oli thought a mountain made of rock and glacier is no place for polar bears to hang out. On the summit they enjoyed the view for a while and then started heading back down. 30m down from the summit all of a sudden a polar bear showed up from behind a boulder only 15m away! It was a massive beast and lucky for them they were talking loud and that somehow scared the bear which quickly ran away. When back on the boat, they wondered : Why was this polar bear up there in the middle of nowhere where there is absolutely no food? Then they realized that the bear must have followed them on the 3h walk to the top of the mountain. It was there only because he had smelled a nice meal. Ben and Oli were very lucky! The bear was surprised when they were walking straight towards it. From then on we were a little more cautious again.

Our last days on Baffin island we could feel winter arriving with the sea starting to freeze along the coast and the snow line dropping all the way down to sea level. Although there was so much more to do, It was time for us to make our way back to Greenland. With the perspective of rough sailing conditions, we knew the adventure wasn't over. Indeed the crossing was tough because it was cold and snowy but the worst happened as we came in sight of Greenland. A big storm surprised us on the most tricky part of the crossing only 6 miles away from our destination! We had to weave through lots of rocks and low depth while the waves suddenly became huge. The boat was crashing in the waves and we were all wet and cold but thankfully we found shelter behind a little island and eventually reached the harbor of Sisimiut... That was the end of the adventure. Again, sailing and climbing proved to be a perfect combination.

SUMMARY OF CLIMBS
In total we opened 10 new routes from 400m to 1000m climbed in alpine style. We used the boat as a base camp and way of transportation to the base of each climb. We placed no bolts or pitons. 5 routes were put up in Greenland, Uummannaq area, 4 in Sam Ford Fjord, Baffin Island and one in Gibbs Fjord, Baffin Island. The co-ordinates were taken from the sea opposite the start of routes.

Crockodiles Have Teeth
E5, 5.11b/c, 400 meters.
The right hand edge of the main face, moving right at the top to finish by an overhanging crack.
FA (free): Nicolas Favresse, Sean Villaneuva 13 July 2014
Descend: Walking on the back side

Drygalskis Halvo
First ascent of Funky Tower (70035N 510 16W)
No Place for People, a.k.a.Sunshine and Roses
E6, 5.12a, 500 meters
A steep, varied, technical line towards the left side of this face. Reports of much loose rock, especially on the sloping terrace leading to the summit ridge.
FA (free): Sean Villaneuva, Ben Ditto
Descend: Walking on the back side

Baffin, east coast
Sam Ford Fjord
Lurking Tower (Mike Libecki’s name - 700 35N 710 17W)
Up the Creek without a Paddle
E5 6a, 5.11+, 500 meters
Starts up the dihedral on the right and follows crack lines, turning a roof, to the top. Libecki’s aid route was followed after 7 pitches but without using any of the aid nor bolts.
First Free Ascent: Sean Villaneuva, Ben Ditto 12 hours 15/16 August 2014
Descend : Walking on the back side

SuperUnknown Tower
Imaginary Line
E3 5c, 5.10+, 1000 meters
Takes the obvious red groove and crack on the right of the Tower leading almost to the top. The hardest pitches were after the groove at the top, especially as it was wet and snowy. This was the second ascent of the SuperUnknown Tower.
FFA: Sean Villaneuva, Ben Ditto 21/22 August 2014
Descend: A rappel to remember straight down the original sheer aid route.

Walker Citadel
First ascent of the South East Pillar (Drunken Pillar) (700 50N 710 43W)
Shepton’s Shove
E6 6b, 5.12a, 1000 meters
The obvious arête starting all the way down and leading to the top of the Pillar. The hardest pitches were at the top.
FA (free): Nicolas Favresse, Olivier Favresse 23/24 August 2014
Descend: Walk south to another summit and down into a gully leading to a lake.

The Turret
First ascent of the East face of the Turret
Life on the Kedge
E6 6b, sustain in the 5.11/5.12 range, 900 meters
Start on the buttress just to the right of the iconic chimney crack splitting the Turret from top to bottom, and takes the obvious orange pillar. Mid ways up, the lines goes on the left hand side where the cracks just kept coming out of nowhere!
FA: Nicolas Favresse, Olivier Favresse 28/29 August 2014
Descend: 10 raps down the swiss route straight from the top