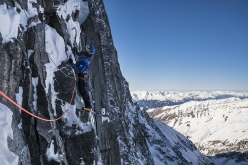 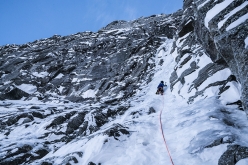 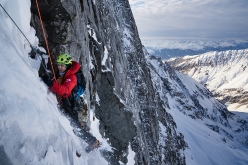 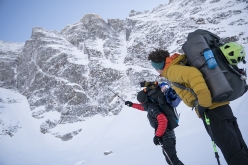 Alpinism in Austria: David Lama has completed the Sagzahn-Verschneidung in the Valsertal with Peter Mühlburger. The mixed route up the Sagwand is circa 800 meters high and graded M6/A2.

Those who know David Lama well know that one of his favourite winter mountaineering hunting grounds is the little-known Valsertal, an evocative yet ice cold valley about an hour from Innsbruck where the Austrian alpinist has already established a series of difficult climbs.

Lama’s love for this valley began, paradoxically, in the summer of 2008 when he teamed up with Jorg Verhoeven to forge Desperation of the North Face, an 800m rock climb up the North Face of Sagwand. Often climbing past wet and friable rock, Lama realised that in winter the face would be completely frozen, that the risk of falling rocks would be reduced to a minimum and that, as he later told planetmountain.com, when the temperatures drop the entire valley "... transforms into a fantastic winter playground."

In 2012 Lama skinned up on his own to establish the difficult Badlands (700m, 6a M5 WI4 A1) on the unnamed face between Sagwand and Hohe Kirche. In 2013 he struck gold on three occasions: in March he made the first winter ascent of Sagwand with Hansjörg Auer and Peter Ortner; in May he soloed Sagwand via the Mittelpfeiler route; in December he returned to the Hohe Kirche and made the first ascent - once again solo - of Nordverschneidung.

Lama has now put the spotlight on the valley once again with his first ascent of Sagzahn - Verschneidung, the evident corner that separates Mt. Schrammacher from Sagwand. A first attempt in 2014 with his friend Clemens Holzleitner ended after just three pitches - Lama confessed to having seriously underestimated the difficulties - while in 2015 with Uli Czopak he breached the 200 meters of mixed climbing, only to bail as dusk set in. Two weeks later the duo retreated from pitch two as Czopak had been hit by ice.

This winter the wall came back into condition and Lama teamed up with climbing partner Peter Mühlburger. The two slept in a tent below the wall, then at dawn on February 15th they started climbing. After 1.5 hours they reached the top of the first snowfield and roped up. Peter then led the first mixed pitch leaving the remainder - the most difficult parts of the route - for Lama to lead. The second pitch follows a shallow corner, while the third tackles the jutting roof and was breached with the use of aid. Lama snapped hand and footholds on several occasions, yet somehow he always managed to keep ahold. After six difficult pitches the two came to the end of the main difficulties and then continued more easily up a system of snow gullies to the summit, which they reached at 17. At 22 they were back at the car.

Lama states that this new route is "among the hardest lines that I have climbed on the Sagwand." Technical difficulties aside, the 27-year old stated that the climb "is of great personal value to me: I have looked at it for such a long time, it took me several attempts to get it done, and every time, I underestimated the climb. Now, the first ascent is finally finished; I don't have to lead any of those pitches again and can gaze at the route with a deep sense of satisfaction."