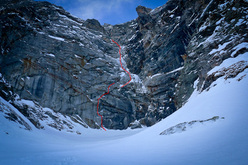 The line chosen by David Lama is located exactly halfway along the unnamed face which connects Sagwand with Hohe Kirche and first ascends 60m of ice to reach an easy snowfield which, in turn leads to the crux of the route. This is a circa 250m high steep face which is comprised of a 50m rock face (6a A1) and a traverse and pendulum right (one friend and peg left in-situ) which leads to some difficult mixed pitches (M5). Lama self-belayed through the crux, after which he finished the route by climbing another snowfield and an M4 mixed pitch which led to easier terrain and the summit. Lama estimates that his 700m high Badlands has difficulties somewhere in the region of 6a M5 WI4 A1.

How was this experience we asked Lama. "Fantastic" he replied "I originally wanted to climb a new line up Schrammacher but there was too much snow and it was simply too dangerous. So I sat down and looked around and discovered this line. I thought I'd check it out and if it were too difficult, then I'd simply abseil off. I didn't really think I'd climb the entire face, I just wanted to give it a go and then, as I climbed, I felt 100% safe."

What about solo ascents in general? "I hardly ever climb alone" explained Lama "because I like to share the experience with my partner, and also because with a partner I can climb harder routes. If I climb alone I always need to feel completely in control. Otherwise I don't even bother setting off."