Peter Ortner on the upper section of Schiefer Riss on the Sagwand, climbed for the first time in winter together with Hansjörg Auer and David Lama on 16-17/03/2013
Photo by David Lama 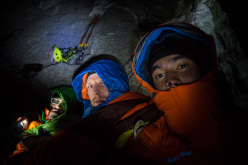 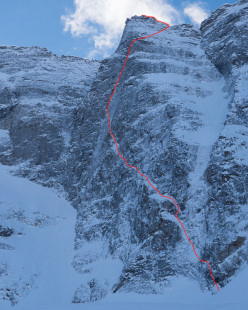 The route line of Schiefer Riss on the Sagwand, climbed for the first time in winter by Hansjörg Auer, David Lama and Peter Ortner on 16-17/03/2013
Photo by David Lama

On 16 and 17 March 2013 the highly experienced Austrian alpinists Hansjörg Auer, David Lama and Peter Ortner made the first winter ascent of the Sagwand via the route Schiefer Riss first climbed by Mathias Rebitsch and Roland Berger in 1947.

The Sagwand, high up in the Valsertal in Austria's Zillertal, is a cold and inhospitable place even in the best of summers and its sinister reputation for damp, brittle rock convinces most climbers to quickly look elsewhere. Not so Austrian ace David Lama who in 2008 teamed up with Dutchman Jorg Verhoeven to forge Desperation of the Northface, a difficult and extremely serious outing up the mountain's main feature, the 800m, nigh vertical Sagzahn. This massive "tooth" had been breached back in 1947 for the first time by legendary Hias Rebitsch together with Roland Berger via the obvious diagonal leading Schiefer Riss, the crooked crack which immediately became one of the most fearsome alpine outings in Austria's Tyrol. So much so that the first repeat was carried out by Heinz Mariacher and Hans Peter Brandstätter Hölzl in 1976, almost three decades later.

66 years have passed since the first ascent and the known repeats were few and far between; a few years ago a massive rockfall took away an enormous chunk of the route and although it no longer exists in its original form, when Lama crossed it 5 years ago with Verhoeven he immediately realised that this offered ideal terrain for a difficult winter outing. "The climbing is really demanding" Lama told Planetmountain "reckon with loose rock and poor protection throughout. Anything here is a real alpine undertaking and you can always be certain you'll be alone up here. It's one of the most beautiful areas for winter climbing in the Tirol and you often encounter Chamonix-like conditions."

In the year's that followed Desperation of the Northface, Lama homed in on the Valsertal on numerous occasions and these visits culminated in his April 2012 solo first ascent of Badlands up the unnamed face between the Sagwand and Hohe Kirche. The idea of climbing Schiefer Riss resurfaced and he discussed its feasibility with habitual climbing partner Peter Ortner and also fellow Ötztal alpinist Hansjörg Auer, both of whom were keen on attempting a winter ascent in this valley which has, unjustly, fallen into disuse. "Schiefer Riss is the most obvious line up the face" explained Auer "graded VI this route made climbing history not only here in the Tyrol, we simply had to give it a go!" Ortner confirmed, "As a climber we just couldn't say no to David's idea."

A first go took place on 11 March without Ortner due to his previous commitments, and although Auer and Lama made good progress, they only reached 2/3 height before night set in. Without bivy gear and with temperatures well below zero the duo abseiled off from their "demanding and exciting first attempt."

The two returned 5 days later, this time with bivy gear and, importantly, with Ortner. After a 2 hour skin up they reached the base of the route at 9:00am and then set off, aiming for a small ledge at circa half-height they had noticed on the first attempt and which would serve as their comfortable bivy spot for the night. But things would turn out differently:  "We hacked away at the snow and ice and then got ready for what was probably the hardest night of our lives" recounts Lama. "When we left the car at 7:00am the temperature had already dropped to -22°C and although we'd brought bivy gear, we'd opted for some lightweight sleeping bags and so we shivered through the freezing night, exposed to the constant spindrift." The trio slept for no more than 1/2 hour in total and Ortner explained "We were well aware that we stood absolutely no chance of sleeping, so we just sat down next to each other and waited for dawn to break." After enduring the bitter cold - and seriously questioning their sanity - they got off to an 5:00am start and completed the route. The summit was reached shortly before midday and they then rapidly abseiled down the face, first down the route and then, when this traverses, they continued directly down the fallline. "It may sound silly to some" Lama added "but for us reaching the summit is always really important, we still consider it an integral part of the game."

The game these three young alpinists played was by no means simple: while Lama climbed the first block past technical terrain, Auer's leads breached friable rock to pave the way for Ortner's leads up demanding, alpine terrain. "My leads went into unknown territory since the previous highpoint had been a pitch above our bivy." stated Ortner adding, "This meant that the time had come for me to contribute to this winter ascent." Auer stated, "the climbing was intense throughout, only a few pitches can be considered "easy". Everything was done with ice axes and crampons, the pro wasn't great and a fall is not recommended. We all managed to climb the entire route free. Leading a route is always tough mentally, so it was really great to climb as a trio and be able to exchange leads." Superfluous to say that the VI, M7, 80° grade serves only as a general indication as to the committing nature of the route.

Three days after the first winter ascent of the Schiefer Riss - and the Sagwand North face for that matter - Auer confided to Planetmountain that they were all still pretty burnt out from the undertaking. "As often happens, major challenges can still be found here in the Alps, in the mountains in our backyards. For all three of us this was definitely one of our hardest alpine routes."