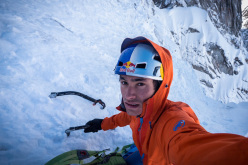 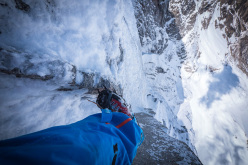 On 14 May David Lama soloed the Mittelpfeiler route (800m, M5) up Sagwand in the Valsertal, Zillertal Alps, Austria.

Sagwand, the Valsertal and David Lama seem to go hand in hand. The Austrian alpinist has climbed a flurry of routes in this valley including the solo first ascent of Badlands in April 2012 and the first winter ascent of Schiefer Riss together with Hansjörg Auer and Peter Ortner in March this year, and in mid-May Lama made his way up into the valley basin to make an ascent of the Mittelpfeiler route. While officially already in spring, it is worth noting that the route was in full-blown winter conditions.

Mittelpfeiler was first ascended by P & P Hofmann in the summer of 1965 and graded V, and while Lama states this 800m line as "nothing extreme" (it breaches difficulties up to max M5 in winter) he is keen to point out that it is "a really beautiful route, well-worth repeating."

Lama described the Mittelpfeiler as follows "On the whole the climbing is relatively easy, and therefore all the more beautiful. You climb a fair way up a snow couloir and this is then followed by a short mixed section which leads to the final 200m. These are far steeper and you're constantly on mixed terrain and it's pretty exposed up on the final pillar. The crux is up there, vertical, about 10m of M5." Although Lama had taken a minimum amount of gear, his rope remained in his pack and he soloed the entire North Face in just 4 hours.

Sagwand and the entire Valsertal are certainly one of Lama's favourite winter climbing areas and the 23-year-old explained "The Valsertal is really special for me and I've spent lots of time in this valley. On the whole the ambient is fairly serious, it's not an easy area to climb in and despite being so close to civilisation, you really get the feel as if you're on a big mountain, that's exactly why I like it. Despite the great quality winter routes you hardly ever meet any other climbers, at most you catch sight of the odd ski mountaineer, nothing more." Best time of year we asked? "I'd say winter, definitely. In summer Sagwand is often wet and friable, as Jorg Verhoeven and I found out for ourselves during our ascent of Desperation of the Northface back in 2008. In winter though the face freezes tight, there's no rockfall and it all transforms into a fantastic winter playground."