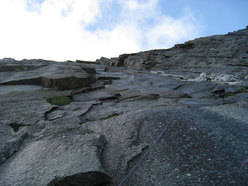 David Lama on the fifth pitch of Desperation of the Northface, Zillertal Alps.
Photo by Verhoeven archive 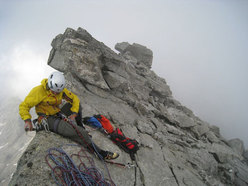 David Lama on the summit of Desperation of the Northface, Zillertal Alps, Austria.
Photo by Verhoeven archive

David Lama from Austria and Jorg Verhoeven from Holland have carried out the first ascent of "Desperation of the Northface", an 820m line with difficulties up to 7b on the Sagwand (3227m) in the Zillertal Alps, Austria.

Better known for their astounding sports climbing and competition results, David Lama and Jorg Verhoeven completed their new route in two stages. An attempt at the start of August resulted in the first 8 pitches, but the duo retreated due to poor weather. They were back a few weeks later and after a short night in the Geraer Hütte they set off at 4.00 am on 21/08/08 and reached the top at 19.00 after 13 hours of non-stop climbing.

Lama and Verhoeven encountered 7b terrain on superb alpine granite and Lama slipped on the 3rd pitch due to early morning moist conditions, falling long onto tied-off peg. The duo used predominantly natural pro for the route but added circa 10 bolts on stances to ensure for a safe abseil descent. Lama explained they deliberately placed a large number of pegs to facilitate route finding, but that some sections are nevertheless run-out and require full 7b on-sighting skills.


Desperation of the Northface
Sagwand (3227m) Zillertal Alps, Austria
First ascent: David Lama & Jorg Verhoeven, 08/2008
Length: 820m, 17 pitches
Grade: 7b
Gear: 1 set of friends, 1 set of nuts, small set of pegs
Getting there: the Sagwand is located on the Austrian/Italian border, close to Innsbruck. Take the motorway towards the Brennero and exit at n. 33 for Grieß am Brenner, drive through this then turn off at Stafflach for St. Jodok / Vals. park the car at the Gasthaus Touristenrast carpark and continue on foot (3 hours).
Access: from the Geraer Hütte (2324m) walk up to the obvious Sagwand. Walk up the snowfield leftwards to the top of the wall. Crampons may be necessary for the final section, beware of rock fall. Calculate 2 hours.
Descent: Abseil down the line of ascent
Notes: Some sections, not just the 7b crux but also some 6c and 7a pitches are run-out and require full 7b on-sighting skills. Because of snow melting from the 3250m high summit the route is prone to rockfall. Furthermore, the route climbs a series of large hollow flakes. The first ascentionist underline the serious nature of the route.
Topo: download route topo