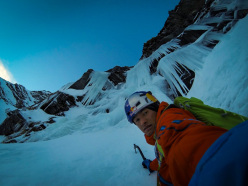 "It's actually nothing particularly special, simply a line that's been playing in the back of my mind for a couple of years, something I've always wanted to climb sooner or later. Now it's done." Ace Austrian alpinist David Lama plays down his latest ascent up the North Face of the Hohe Kirche in the Valsertal, but it's certainly worth finding out more about his solo ascent of the 400m open corner if only for the fact that Lama describes it as "a great climb, with a relatively short access, in a fantastic setting, well worth doing." And if it's he who says this, then it's certainly worth noting.

Before his solo ascent Lama got the chance to inspect the line up close a few weeks beforehand while attempting a different route further to the left together with Ben Lepesant. At the time the duo were forced to abandon the climb and with Lepesant currently away and conditions ideal, Lama decided that on Sunday 8 December the time had come to try the corner to the right.

"On the whole the climbing is pleasant and never really too difficult. About 100m of 90° ice, at times quite exciting past some daggers led to some easier terrain." After this start another 100m of easy mixed climbing past some smaller icefields brought Lama to the crux of the route. Four pitches he described as "fairly demanding". Read, exposure and poor rock that convinced Lama to self-belay and proceeded upwards without using his ice axes. "I recall it wasn't that easy. The rock wasn't great, it was hard to protect and climbing with crampons on the bare rock made things dicy" Difficulties? "At this point perhaps somewhere in the region of upper UIAA grade VI, lower VII. All I can say is that it was cold, perhaps down to -10°C." Yes, because this valley is also known as the freezer of North Tyrol. For good reason.

Lama required circa half an hour to breach the 30m crux pitch, after which a final 100m of easier terrain led pretty much directly to the top. The ritual summit photos were followed by a quick descent via the West Face, back to his skis and down to the car. Six and a half hours in total for the round trip from car to summit and back again, of which 2 were needed just for the morning approach. Pretty fast therefore, so fast in fact that Lama didn't even sign the summit book: "Actually I forgot to do so, after drinking some tea I simply forgot about the book and started the descent."

"It's hard to give it an overall grade, perhaps something like 90°, WI4, M4/5" As I said, it's nothing really special. But it's something I always wanted to do and it's certainly the easiest, most logical line up through the North Face."

Lama has called the line Nordverschneidung and it's worth remembering that he has already carried out winter ascents in the Valsertal such as Badlands (first ascent, solo, April 2012), Sagwand Schiefer Riss March 2013 together with Hansjörg Auer and Peter Ortner) and Sagwand Mittelpfeiler (solo, May 2013).