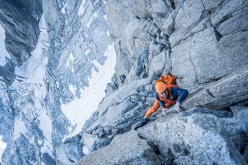 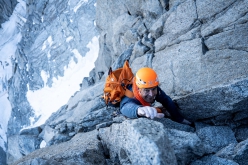 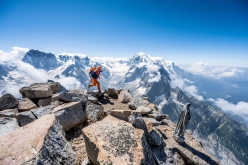 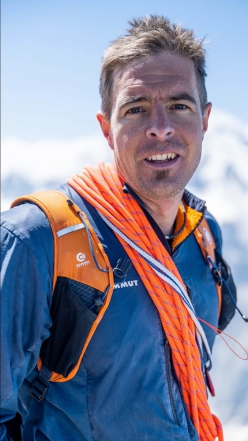 On the 15th of August 2021 Dani Arnold from Switzerland blazed up the North Face of the Petit Dru in the Mont Blanc massif in a mere 1 hour, 43 minutes and 35 seconds, setting what is now the fastest known time on this iconic peak. Unlike Christophe Profit who astounded everyone in 1982 with his 3 hour 10 minute ascent of the Directe Américaine on the mountain’s west face, 37-year-old Arnold followed the Allain-Leininger route, ie the original climb up mountain established in 1935 by the Frenchmen Pierre Allain and Raymond Leininger.

In doing so he made what, at the time, was the fastest ascent on each of the six major north faces of the Alps. This undertaking started in 2011 with the Eiger, and was followed by the Matterhorn in 2015, Pizzo Badile in 2016, Grandes Jorasses in 2018 and Cima Grande di Lavaredo in 2019. At present only the Eiger has been climbed faster, by the late Ueli Steck in 2015.

The Swiss mountain guide first climbed the Allain-Leininger route in 2020 with Michael Kräftner. The duo required 14 hours and, realising just how demanding the route finding and conditions can be, Arnold decided not to stash his extra rope on the summit. The thought of speeding up the route didn’t let him go though and he returned in autumn that year just to study the mountain. He noted no rockfall and, judging the project feasible in perfect conditions, he travelled to Chamonix in June 2021 and reclimbed the route with Roger Schäli, this time in 10 hours. Fast, but not as fast as they had wanted due to the copious amounts of snow and ice. "It was again very sobering" explained Arnold. Nevertheless he stashed gear he might need to descend off the mountain alone.

In August higher temperatures and rockfall pervade the face, but this year conditions proved exceptional. Arnold seized his chance and on 14 August travelled to the Mont Blanc massif with Stefan Brugger, intent on soloing the route "only if everything felt 100% perfect". On reaching the bivouac at the base of the route he made the decision to start early the next morning; a helicopter flew overhead to film his ascent, and at 8:46 he set off.

He recounts "The first part of the wall is rather easy terrain, technically not difficult, but conditionally demanding. Then it got steeper, and I felt better and better. One of the most unpleasant places was a wet chimney. At first, I thought I could get up there with my backpack, but that was hopeless. So, I had to take off the backpack, secure it to a sling, and always push it up in front of me while climbing. Two pitches further on followed a very unpleasant dihedral, which is also almost always wet and frozen. Fortunately, I found another line there on the ascent with Roger. This one was much more exposed and technically more difficult, but at least not wet or frozen! After the big ice field in the middle of the wall, it got a bit steeper again. I found my rhythm but never looked at the clock. I didn't care about the time, but I was very aware that I wanted to give everything now. Countless training and preparation tours for exactly this moment! It was not important for me to be extremely fast. But I really wanted to give everything. I wanted to prove to myself that I could do it."

Arnold reached the summit in just 1 hour and 43 minutes. After calling friends and family, he descended off the mountain, met the film crew at the hut, and then took the train from Montenvers to Chamonix. In his report published today, he stated "It was only a few days ago that I realized that at the time I made the fastest ascent on each of the six major north faces of the Alps, which also makes me a little proud. More than 10 years ago, this chapter began with the Eiger North Face and has now ended with the Petit Dru. I couldn't imagine a more beautiful conclusion."