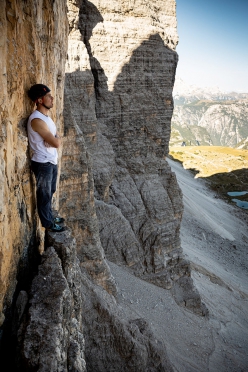 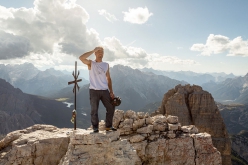 Swiss alpinist Dani Arnold on the summit of Cima Grande di Lavaredo, Tre Cime di Lavaredo, Dolomites, after having made a free solo ascent of the Comici - Dimai route in 46 minutes and 30 seconds
Photo by Mammut 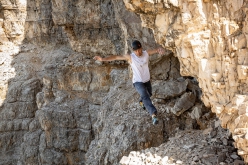 Dani Arnold racing across the ledge during his free solo ascent of the Comici - Dimai route up Cima Grande di Lavaredo, Dolomites, in 46 minutes and 30 seconds
Photo by Mammut 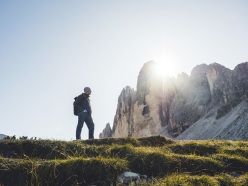 Interview with Swiss mountaineer Dani Arnold after the ropeless ascent of via Comici - Dimai up Cima Grande di Lavaredo (Dolomites) in 46 minutes and 30 seconds.

As reported, on 5 September 2019 the 35-year-old Swiss alpinist Dani Arnold climbed the classic Comici - Dimai route the north face of Cima Grande di Lavaredo without a rope in just 46 minutes and 30 seconds. It’s worth noting that in 2014 Christoph Hainz also carried out a extremely fast free solo of the same route, climbing up to the circular ledge in 48 minutes while filming his Man of the Three Peaks

Dani, when did you start thinking about making a free solo ascent of the Comici - Dimai?
I got the idea many years ago. In general I’m interested in the large north faces, and the first time I did the route was with a friend years ago, it took us almost seven hours. Back then I thought I’d never be capable of climbing it in less than an hour.

What were your thoughts about the route back then? First ascended in 1933 by Emilio Comici, Angelo and Giuseppe Dimai
The route is world famous. The steepness, exposure and the fact that it’s only protected with normal pegs have made it into a mountaineering milestone. The first ascent was an absolutely unbelievable achievement for these three climbers. They were highly skilled and had an incredible instinct for where it was possible to climb. I still am really impressed by these mountaineers and by their climb.

It was done solo for the first time back in 1937, by Emilio Comici himself. This ascent has been described in no uncertain terms, as one of the all-time greatest achievements in climbing.
It was a truly incredible feat that clearly shows how strong the climbers back then were.

Before your solo ascent you climbed the route three times with friends. So how well did you know it?
I can remember routes and moves really well, and this helped me a lot. Having said that, remembering 500 meters of difficult terrain in just three goes isn’t that easy, especially because not all holds are 100% reliable. But I’d only done the Cassin route on the Grandes Jorasses three times before my free solo, so I felt pretty good.

What time were you looking for? And where were you fast?
My goal was to climb it in about an hour. Looking at the track of my watch I noticed that I was almost just as fast on the more difficult, lower section than the "simpler" section towards the top. In other words: where it’s easy, I was quite slow. Pure endurance isn’t my forte. My main goal though was clearly not to make any mistakes and to be as safe as possible. I also knew though that I had to rush if I wanted to be really fast. Of course, I’d have been quick without a rope in any case, without even glancing at my watch and considering the time. But had I not tried to be in a rush, I would have finished way off my mark! Consider for example the first difficult pitch, located at 80m. It’s easy to get there and everyone is fast at the start, but once you get there, have a look at your watch. You’ll notice that the minutes pass by extremely quickly!

You mentioned to us previously that you felt relatively relaxed during your solo
Yeah, I was never afraid, I never felt unsafe. The climb was simply somewhat tiring :-) I almost never lowered my arms during the entire climb and consequently had problems because of cold fingers. In the videos you might notice how, on the small ledges, I shook my arms to tried to warm them.

The rock is dolomite, not as solid as granite…
Exactly. I couldn’t simply pull on every hold. Due to the numerous repeats though the rock is fairly solid. And I knew the holds and footholds that weren't reliable, that I deliberately didn't touch.

In the video one can see you darting across the ledge...
Yes, it’s exposed up there, but after all the steep lower section it seemed safe enough. After that ledge the route isn’t over, I still needed exactly 8.5 minutes to reach the summit. This proved challenging.

There’s obviously a fine line between speed and safety
In principle, speed also equates to safety, especially on many alpine routes. Of course, things were different here. Climbing without a rope too fast always means being less precise, and even on the simplest pitches I had to place my feet perfectly on each foothold. This degree of precision isn’t that important on snow and ice routes up the North Face of the Eiger or the Matterhorn.

How do you prepare yourself mentally?
It’s a process that’s been repeating itself for many years, it’ss always very similar. I can't really describe it in words. It needs excellent mental preparation and great self-confidence. When this process takes hold, I know I'm ready. This feeling has never let me down.

You’ve scored speed ascents on the Eiger, the Grandes Jorasses, the Matterhorn and many other mountains. You’re known above all for these. But is this the complete and correct picture of Dani Arnold, or is there more to you?
No, this isn’t correct. I’ll give you an example, Anubis in Scotland. If someone asks me about the climbs that I’m proudest of, then Anubis is at the top of the list. I've always said that. Of course, fast solo climbs are an important part of me. For the broader public, this is easy to understand. But in the last few months I climbed Broad Peak, established new ice climbs in Japan, made the first ascent of mixed outings in the Schöllenen gorge in Switzerland. Speed ​​was never an element in any of these climbs.

Out of interest, why the helmet?
If I fall I don't need a helmet, I’m aware of that. But the helmet protects me from small rocks falling from above, either spontaneously or dislodged by other climbers ahead of me.

Ah yes: so were you alone on the route? Or did you have to overtake other climbers?
I overtook a team of three on about pitch 7, then I overtook two climbers in the corner, and another team just below the summit. But they didn't slow me down, maybe a few seconds only. It wasn’t a problem. Before starting the route though I had to wait for quite a while since the climbers were on the lower section of the route and I didn't want to overtake them there. I started shortly after 14:30.

And once at the summit cross, how long did it take to descend ;-)
I can tell you it took much much longer. About an hour and a half. It was the same on the Matterhorn and Grandes Jorasses ;-) The descent is an integral part of any ascent in the mountains, as the saying goes, when you reach the summit you’re only halfway there. You’ve only finished the climb once you’re safely back on the valley floor.

Comici - Dimai
First ascentionists: Emilio Comici, Giuseppe & Angelo Dimai, 13-14/08/1933
Via Comici is the classic example of climbing in the Dolomites. Although difficult if climbed without using aid, its popularity is justified by its beauty and excellent rock.