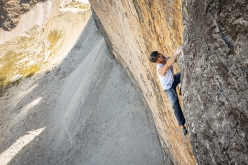 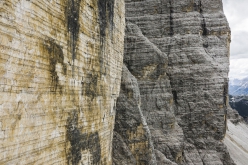 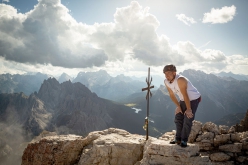 Dani Arnold on the summit of Cima Grande di Lavaredo, Tre Cime di Lavaredo, Dolomites, after having made a free solo ascent of the Comici - Dimai route in 46 minutes and 30 seconds
Photo by Mammut 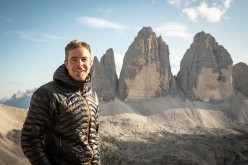 Dani Arnold in front of the Tre Cime di Lavaredo, Dolomites after his free solo ascent of the Comici - Dimai route on 5 September 2019 in just 46 minutes and 30 seconds. He told planetmountain.com 'I didn't have the slightest idea I was that quick. I felt relatively relaxed and everything went smoothly, perfectly I’d say even. It was a great day in the mountains."'
Photo by Mammut

On 5 September 2019 Swiss mountaineer Dani Arnold carried out another one of his fast raids up in the mountains. This time the 35-year-old chose one of the most famous routes in the Dolomites, the classic Comici - Dimai up the north face of Cima Grande di Lavaredo, climbing this emblematic masterpiece in just 46 minutes and 30 seconds from the base of the climb all the way to the summit cross.

An interview will follow in due course, in the meantime speaking by phone Arnold told planetmountain.com that he had climbed the route 3 times previously, twice this year and once in the past, and that this was his first time without a rope. His aim was certainly to climb the route as quickly as possible but, as he stated "I didn't have the slightest idea I was that quick. I felt relatively relaxed and everything went smoothly, perfectly I’d say even. It was a great day in the mountains."

It’s worth remembering that in 2014 Christoph Hainz also made a fast ascent of the same route, climbing up to the circular ledge in 48 minutes while working on his film Man of the Three Peaks

Comici - Dimai
First ascentionists: Emilio Comici, Giuseppe & Angelo Dimai, 13-14/08/1933
Via Comici is the classic example of climbing in the Dolomites. Although difficult if climbed without using aid, its popularity is justified by its beauty and excellent rock.