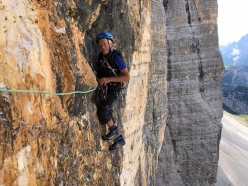 Reiner Kauschke repeating, with Christoph Hainz, the Saxon route - Superdirettissima up the North Face of Cima Grande di Lavaredo, Dolomites. Kauschke had made the first ascent of this climb over 17 freezing days in winter 1963 with Peter Siegert and Gert Uhner
Photo by Christoph Hainz 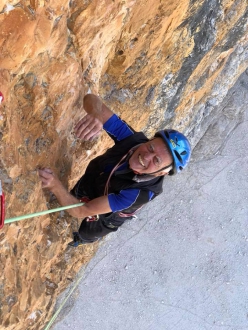 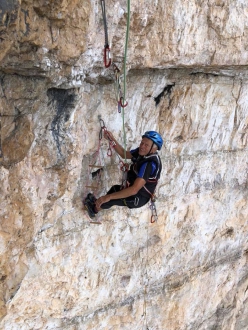 Reiner Kauschke repeating the Saxon route - Superdirettissima up the North Face of Cima Grande di Lavaredo, Dolomites with Christoph Hainz. In the photo you can see one of the aiders used by Kauschke during the first ascent
Photo by Christoph Hainz 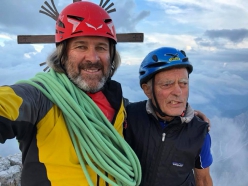 Accompanied by mountain guide Christoph Hainz, Reiner Kauschke has repeated Superdirectissima up the North Face of Cima Grande di Lavaredo in the Dolomites. Kauschke had made the first ascent of the ‘Saxon Route' with Peter Siegert and Gert Uhner in 1963 and now he repeated the line in 17 hours at the extraordinary age of 80.

Cima Grande di Lavaredo, North Face, January 1963. After just only two days of preparation, in a freezing 17-day single push the alpinists Peter Siegert, Reiner Kauschke and Gert Uhner made the first ascent of the Superdirectissima in the midst of winter. With their resolve strengthened after having made the first winter ascent of the famous Hasse Brandler two years earlier, the three Saxons endured temperatures down to -20°C as they forged their line directly through the fall line, using 450 pegs and 25 pressure bolts.

The resulting Superdirectissima, or Via dei Sassoni, attracted the interest of the mainstream media, but also caused controversial in the mountaineering community as questions were raised regarding the amount of gear used. Regardless, the route marked the apex of the direttissima period and remains a testing climb even today.

And even two days ago, when the now 80-year-old Kauschke returned to repeat "his" route with local mountain guide Christoph Hainz. Incredibly, the two required just 17 hours, demonstrating Kauschke’s out-of-the-ordinary hardening. Hainz's comment after the ascent: "80 years old and not tired in the slightest. What a superb effort Reiner!"