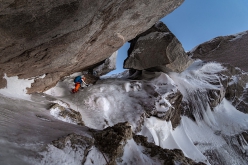 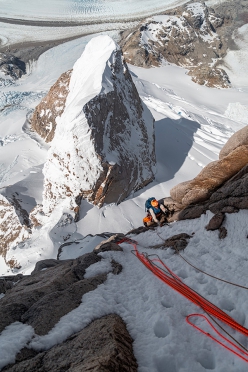 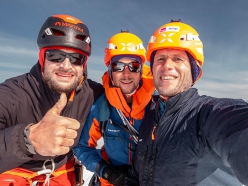 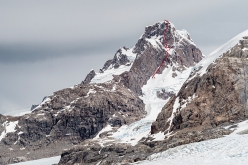 While climbing in Northern Patagonia, Swiss mountaineers Lukas Hinterberger, Nicolas Hojac and Stephan Siegrist made the first ascent of the NE Face of Cerro Cachet . The route has been called Homenaje a los amigos perdidos in memory of David Lama, Ueli Steck and Julian Zanker. Hinterberger reports.

I suddenly found myself talking to Stephan Siegrist on the phone in the middle of last year. He asked me if I had time to go on an expedition to Patagonia in November. I really couldn’t believe it at first! Stephan is considered to be one of the most experienced alpinists in the world and he’s one of the most well-known mountaineers in Switzerland. He’s an absolute expert on Patagonia and expeditions. Now this same Stephan was asking me if I wanted to come along! It felt like such an honor. I said yes immediately. Patagonia was way on top of my bucket list and I had no real travel plans for the fall. My buddy Nico Hojac probably dropped my name, the two of them know each other from their mutual gear sponsor Mammut. Nico and I were in the elite mountaineering squad of the Swiss Alpine Club (SAC) together and had climbed several peaks as a team. We had also been on expeditions to China and Pakistan together.

Stephan and Nico had done a lot of research beforehand and it was clear that northern Patagonia was by far not as developed as the melting pot of the global climbing scene in the area around El Chaltén is. The town marks the starting point for the famous routes on Cerro Torre, Torre Egger, Cerro Standhardt or Fitz Roy.

We left Zurich on November 3rd towards Santiago de Chile. From there we continued on to Balmaceda and Coyhiache. William Clark – yes that’s really his name – a long-time Argentinian friend and expedition partner of Steph’s, was waiting for us and we proceeded to check if our gear was complete right after we arrived.

William had tents, cookers and so forth with him; things that Steph had left in Patagonia after his last trips. Still we had some things to get. So, our first stop was the hardware store in Coyhiache. It was quite bizarre: I’m not even in Chile for 24 hours yet, it’s my first time south of the equator, and what do I do first? I go to the hardware store with three friends. We needed tarps, wires, saws, cooking pots, gas and a few more things for basecamp. Then we continued to the supermarket. We left with three full grocery carts full of food for our six-week trip and with $900 less in our pockets. We pretty much had all we needed now.

William drove us to Puerto Bertrand with his pick-up the next day, 280km south of Coyhiache. Almost 500kg of gear in the back and five people in the driver’s cab almost brought the vehicle to its knees but we made it. We were greeted in Puerto Bertrand with a blue sky but also with storm winds up to 150 km/h that made the water on the lake fly.

It was unthinkable to cross Lago Plomo to get to where the trail towards basecamp and Nef Glacier starts. We had to weather the storm, as it’s correctly called according to Tobi. Tobi is a friend of Steph’s, a journalist from Hamburg, with whom he had been to Kashmir before. He was supposed to accompany us to basecamp and go back in about two weeks.

We had to wait two days before we could take the small boat our gauchos Hector and Don Ramon provided before we could cross Lago Plomo to the ranch. It was the starting point of our trip 'Into the Wild'. What followed was a two-and-a-half-day foot march through scrubland and marshes, over a few rock spurs and along the banks of the Rio Soler. Six packhorses that belonged to Hector, Don Ramon, and his brother Luis carried our food and gear. They brought our entire material up to the last part of the woodlands in the valley. This is where we set up our basecamp. We built a small, open forest cabin from deadwood, wire and a sturdy tarp – our kitchen, dining room, and chill out lounge in one.

We had to stay in our tents and in our camp the first two weeks. The Patagonian weather presented itself from its rainy, diva-like side. We spent our time with sessions on the finger board, playing chess, reading or building small protective barriers against the imminent flood waters from the near-by river. But really, we just wanted one thing: to finally go climbing.

When the weather improved for a day, we took the chance and got underway. 20 kilometers and almost 2.500 meters in altitude gain later we stood on the summit of the 2.799-meter-high high Cerro Largo. We reached the summit mushroom and climbed in almost vertical rime ice during twilight to the peak after nine hours of a cumbersome ascent with skis (which Robert Jasper and his team were kind enough to leave to us in Chile) across the Nef Glacier. An intense feeling of happiness washed over us on our last few feet. It was beyond words. Around us the inland ice and far off to the west the Pacific was shimmering golden in the evening sun. It was the first summit in Patagonia for Nico and me. What a day!

Our eyes didn’t just gaze to the west in the direction of the Pacific. The striking north-east face of Cerro Cachet caught our attention on the other side. The mountain that’s about 2.700m had only been climbed once after its first ascent in 1971 by mountaineers from New Zealand. Both ascents were made via the rather easy ramp from the inland ice. There had not been an ascent through the vertical north-east face – our challenge for the next stable weather window.

But as nice as the view and the feelings of happiness were on the peak it suddenly clicked – we still had the arduous descent before us. We were only wearing our mountain boots and to ski with them across the glacier that was eroded by the wind and in parts just polished was real torture. We made it back to basecamp after 16 hours of strain – dead tired, hungry, but also more than happy. We didn’t realize what exactly we had just accomplished until we were sitting around the midnight campfire. So to celebrate the day we had a can of tuna with our pasta that night.

The fact that the north-east face of Cerro Cachet was still unclimbed wouldn’t let us go. A few days later stable weather was forecast for several days and we began our mission Cachet. We had to sit out some bad weather in our tent in ABC on the second day after several hours of foot march across the Nef Glacier to the foot of the wall. We set off on the third day. Our route led over an iced-up ramp up to a pass that was studded with rime ice. Here we made a short abseil and a counter-ascent directly beneath the 600 meter headwall. A vertical and wild path through the ice marked the logical line. However, we had to side-track to the left into the rock after we had climbed one pitch. The sun caused more ice fall than we were looking for. We did find a climbable and objectively safe route through very nice and exciting mixed terrain pitch after pitch.
We were able to protect the hardest pitches – we suggest them to be around M7+- with friends and pitons. But a few pitches lead over a thin and steep ice. The hollow cavities lying beneath them required nerves of steel.

We finally made it over the 600m snow cornice covering the peak after climbing through the ice and rock wall for ten hours. A thick ocean of fog covered the inland ice, the easy summit ridge was in front of us. It was just after 6pm as we finally stood on the main peak of Cerro Cachet. We fell in each other’s arms. Not as the first rope team ever, but as the first that had reached the summit via the north-east wall.

Steph laid down a small doll on the peak. It was meant for our friend and climbing partner Julian Zanker. Julian was supposed to be on this expedition to Patagonia, too. But he died in February 2019 after a fall in the north face of the Eiger. In a sense he was with us on our climb to the summit of Cerro Cachet. It was a very emotional moment for Steph. The name of our route is also in memory of Julian: Homenaje a los amigos perdidos is what we called it. It means In Memory of Lost Friends. It’s a tribute to Ueli Steck (40), who had a fatal accident on Nuptse in 2017 as well as to 28-year-old Austrian David Lama, who lost his life during an expedition when an avalanche caught him in Canada in the spring of 2019 (with Hansjörg Auer and Jess Roskelley, Ed), and of course to Julian (28).

Aside from a few wild bulls that we had to dodge our expedition only had one real critical moment. It was during the descent of our route that we named after our deceased friends, of all things. The sun had warmed the rocks about 300 meters above the access ramp so much during the course of the day that rime ice the size of cars cut loose in the darkness and literally bombarded us for about an hour. It was a pretty nasty loss of control since there was no way for us to get out of the fall zone in the ramp. But luck was on our side.

We were less lucky after our long hike back to basecamp. Our thoughts had been revolving around a piece of Chilean beef that our gaucho Hector had gifted us. We saved it as a treat after a successful summit ascent. How we would prepare the entrecôte was our number one subject of conversation during our descent. We kept the meat cooled in a water bag in the river. The barbeque grill was ready to go by the time we noticed the extent of the catastrophe: the water bag had a hole; the meat was completely rotten and reeked of decay. There was only one thing left: “liquid chicken.” Our last beers helped to forget the lost asado.