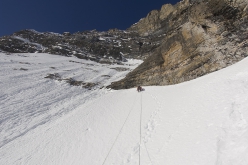 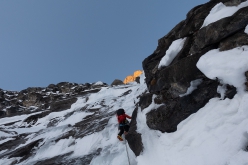 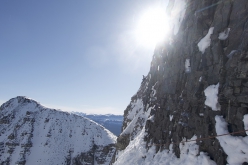 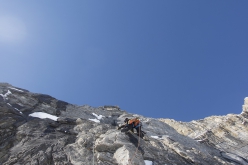 Brette Harrington continues to explore difficult new terrain unperturbed in her backyard mountains and on 17 April the 29-year-old teamed up with Dylan Cunningham to forge a new mixed climb up the hitherto unclimbed NE Face of Mount Niblock in the Banff National Park, Canada.

"Challenging ice and mixed pitches lead to even more psychological rock and mixed pitches through the upper headwalls" are the words chosen by Harrington to describe the 14-pitch outing, which ends on the East Ridge. Harrington credits her climbing partner for leading "one of the most impressive mixed pitches I have ever belayed — finding incipient gear placements while climbing overhanging bouldery terrain", while she herself climbed a snow dusted slab in rock shoes.

The pair had approached the mountain by skiing in from Lake Louise via the Ross Lake Trail. After bivying in the basin below they spent 15 hours climbing the face, and a further 2 hours to descend and return to their camp.

The undertaking was described as "A great adventure and some fabulous climbing but not without its serious moments." The new line has been jokingly called Just a Nibble, is graded M6R, 5.10-, WI5, 500m and follows the important first ski descent carried out in February 2021 down the Gold Card Couloir.