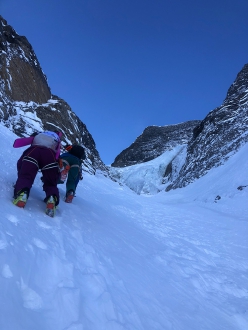 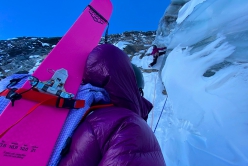 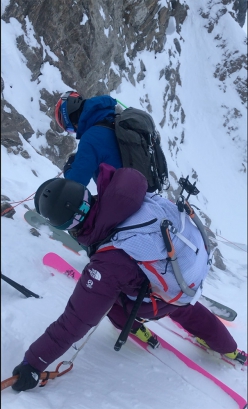 Brette Harrington, Christina Lustenberger and Andrew McNab have made the first ski descent of Gold Card Couloir located between Mount Burnham and Mount Grady in the Monashee Mountains, Canada.

Brette Harrington is best known for her technical summer and winter climbs in the big mountains but a fortnight ago teamed up with Christina Lustenberger and Andrew McNab to complete the first ski descent of a technical and perilous couloir that separates the north faces of Mount Burnham and Mount Grady in the Gold Range of the Monashee Mountains, Canada. Billed as one of the best unskied lines in the Monashees, the couloir is guarded by a fearsome serac and was first climbed in 1984 by Cameron Cairns and Mike O'Reilly and may never have been repeated prior to a fortnight ago.

Harrington and former World Cup alpine skier Lustenberger teamed up on 21 to make a first attempt, only to retreat after attempting to breach the serac on the right. The duo returned two days later with local ski guide Andrew McNab and, after setting off at 9.30am, made swift progress to reach the previous highpoint. This time Harrington climbed a line of weakness on the left edge of the serac and the rock. She clipped into her ice tools twice as she negotiated extremely unstable ice, then after making an anchor her partners jumared the rope, steering clear of the serac. Having overcome this hurdle the trio continued up the final 200m to reach the col at 15:00, before commencing to ski down down the exposed 55° slope they had climbed a short while earlier. Three abseils were needed to negotiate the serac once again, while a fourth abseil at the very bottom got them over a small ice step before they returned safely back to the valley floor.

The route has been named Gold Card Couloir because it is located in the Gold Range and because McNab dropped his gold credit card out of his pocket while on the ascent. The 800m line has been graded M4+ C0, WI4 for the crux pitch on the serac but as Harrington pointed out to Gripped, "The grade we gave does not really convey the experience of that pitch, There were a lot of components that made it feel more intense than just M4."