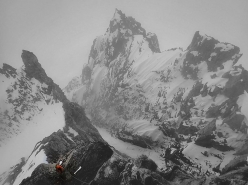 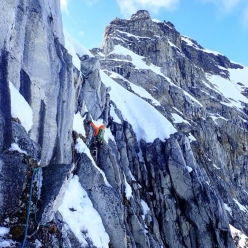 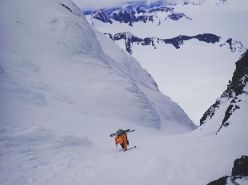 Caro North and Brette Harrington have made the first ascent of new mixed line up the NE Face of Southern Duke and added a new rock climb to the Taku towers on the Juneau Ice Cap in Alaska.

Brette Harrington and Caro North have established a 500m new climb up the North East Face of Southern Duke in Alaska. Harrington, who recently established Life Compass up Mount Blane in Canada, spent a fortnight on the Juneau ice cap with Swiss alpinist Caro North and, after waiting out a heavy storm for 3 days, climbed the "beautiful alpine mixed line" past difficulties up to M5+, 5.10b, 85°.

The weather improved significantly and the the duo climb a new 5-pitch 5.10+ up "amazing featured rock with quite some runouts" on the nearby Taku towers. Furthermore, they completed a strenuous, 2 day-ski touring trip 20 miles across the Takku Glacier in order to ski the 1000m SE Couloir of Devils Paw.

The new mixed route has been dedicated to Marc-André Leclerc and Ryan Johnson who disappeared while climbing the Mendenhall Towers in the Juneau area in mid-March 2018.

We also opened a great rock climb on the Takku towers, 5 pitches 5.10+ on amazing featured rock with quite some runouts. Here @bretteharrington is starting up on pitch 4. We couldn't believe how nice the weather got after 3 days trapped in our tents during à snowstorm. #mammutabsolutealpine #mammutna #julboathlete #petzlgram #scarpaclimbing #alaska #juneauicefield #firstascent #girlspower