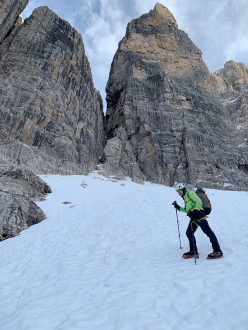 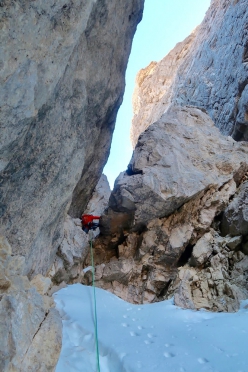 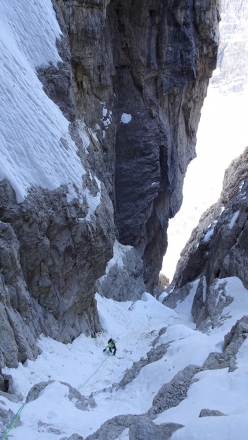 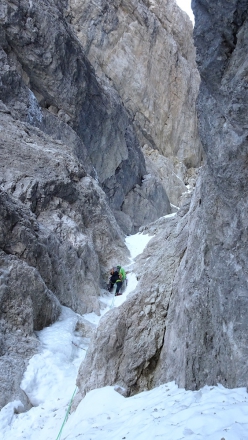 A deep couloir is located between the west face of Torrione Comici and the shoulder of Campanile Basso. Uninviting in summer, this gully is an extremely interesting winter. climb. Mountain guide Francesco Salvaterra reports about his 15 November 2020 ascent with Piero Onorati.

Between the west face of the Comici tower and the shoulder of Campanil Basso lies a deep gully. It lies in plain sight but is absolutely horrid and uninviting, wedged as it is between the enormous overhangs of the north face of Campanile Basso, below loose or wet rock, and prone to rockfall. A paragraph in Gino Buscaini's guidebook confirms this impression: it is described as a deep and horrible rocky gully, which has been done in descent but is best avoided.

I’d been thinking about climbing it in winter for a while, when ice freezes the loose rocks and snow covers the scree and choss. On Sunday 15 November, after an extended spell of good weather and with snow only high up in the mountains, Piero Onorati and I decided to check it out.

It was a world-class climb and the route is really interesting and highly recommended, the climbing is fun and varied, never extreme but by no means trivial. There are many sections of easy snow, followed by tiring mixed section across boulder and corners, as well as a steep wall of ice. The location and ambient are breathtaking and we are certain it could become a classic outing in winter. It may well be that it was climbed previously in winter, but at present it seems as if we were the first.

We equipped all belays in the gully in sheltered spots with bolts and pegs, facilitating abseils. We encountered not much snow, with more snow difficulties will obviously change considerably (probably becoming easier) and some belay stations may be buried in snow. The climb shouldn’t be done if there are other parties on the route: the upper part has numerous loose sections that don’t pose too many problems (the belays are sheltered), but it’s easy to trigger rockfall onto parties below.

While studying the photographs I had in my archives I noticed a similarity between this strip of snow that runs alongside the most beautiful tower in the Brenta Dolomites and a sliver of ice located on the lefthand side of the East Face of Cerro Torre in Patagonia. Los Tiempos Perdidos is a 900m climbs, graded 90 ° M5, which starts from the troubled Glaciar Adela and reaches the Col of Hopel. It was first ascended by France’s François Marsigny together with England’s Andy Parkin in 1994, and their ascent earned the duo the Piolet d'Or.

The story of this first ascent is fascinating: the mountaineers had originally aimed to join the Ragni Route and continue to the summit of Cerro Torre and then descend via the East ridge. When they got close to Helmo via an independent line (never climbed again) they were forced to give up due to bad weather and decided to the Los Altares cirque, on the mountain’s west face. They didn’t know that side of the mountain and, lost in the storm, they managed to cross Passo del Viento, the only way on to El Chalten. Fortunately their adventure ended a week later, when they reached Bahia Tunel much thinner and with far less gear, having abandoned it during their escape. I have always thought that this route, linked with Via dei Ragni up to the summit of Cerro Torre, represents the most beautiful ice climb in the world.