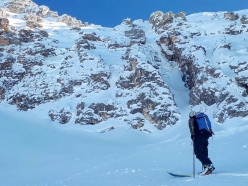 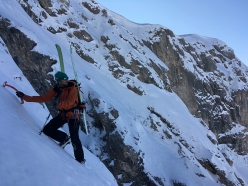 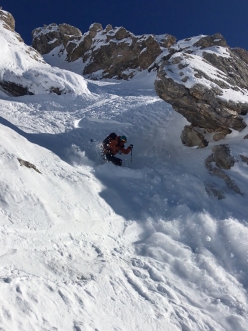 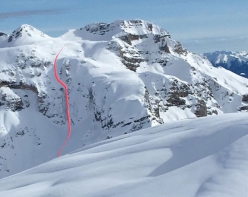 On 05/12/2019 Martin Giovanazzi and Vincenzo Mascaro made what is likely to be the first ski descent down the NE Face of Monte Fibion ​​in the Brenta Dolomites. They have called the gully they skied Canale del Boomerang.

I had my eye on that line ever since the start of the season and the abundant snowfalls in November. A few weeks back I ended up having a drink with friends, including Vincenzo Mascaro who I didn’t know too well. I was immediately struck by his views on mountaineering, on adventure in general, on how he aims for absolute beauty. We got on well right from word go.

After seeing the gully once more I decided to send Vince a photo and he didn’t think twice, replying, “nem!”, let’s go. As soon as the conditions were right we set off to get a closer look of the descent.

Once we reached the base we realised that our original plans, hatched from a distance, needed revising, but nevertheless it was game on for something cool! We decided to climb directly up the line we wanted to ski, initially through a narrow gully, then beating trail ever upwards while we searched for the best descent line.

At the top we basked in the sun and enjoyed the view across our mountains and then dropped in. The descent was logical, initially on a slope that isn’t too steep, but then it gradually narrows down into a S shape before entering the gulley. This forced us to make an abseil and we located two small threads from which we rappelled into the actual gully. At the end of this we were suddenly out on the huge wide slope, it was time to shred.. with a great partner!

Monte Fibion NE Face, Brenta Dolomites
Approach:
The gully is located to the right of Cima Santa Maria and in front of Monte Fibion. The approach is carried out from Passo Carlo Magno, tale the cable car and follow the path that leads towards Crosette, however, continue straight on. The gully is always located right in front of you.
Gear: 40m rope, crampons, ice axe, two threads left in-situ. The angle is never too steep but mistakes are out of the question here. Recommended to ascend the gully from the left via a small cleft.