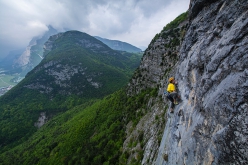 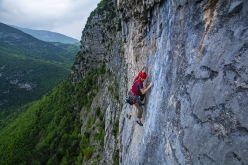 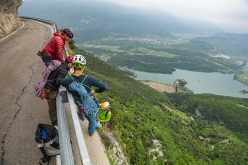 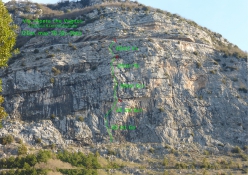 Elio Mazzalai, Nicola Cont and I came up with the idea of ​​establishing this route because the rock faces around Ranzo have always been less popular than others nearby, despite offering a mega view onto the Sarca valley and lakes, and despite being easy to get to.

We reached the base of the crag like in the Verdon, by abseiling off the guardrail, and although we rappelled, we decided that we wanted to establish the climb ground-up in our quest for adventure.

After having observed the face through our binoculars from the valley floor, once down at the base we searched for the line that seemed the most continuous, seeing that the wall is broken by numerous ledges. We then climbed it trad wherever possible and added bolts where the compact slabs accepted no gear. The first ascent was carried out over several days throughout autumn and winter.

The climb has been called Speta che Vegno, wait for us, because it took us several attempts in part due to bad weather and in part due to the aspect of the face, which in good weather becomes a real oven.

The climb ascends slabs and beautiful compact rock, apart from the last pitch which is discontinuous; this weaves its way past a series of ledges up the best looking rock.

19.10.2018
Arco rock climbing: Mescalito on Colodri, the classic multi pitch climb by Renato Bernard and Renzo Vettori
The route topo of Mescalito up Rupe Secca on Monte Colodri in Arco, the multi-pitch rock climb first ascended in 1982 by Renato Bernard and Renzo Vettori and widely considered a masterpiece of the Sarca Valley. By Carlo Cosi, mountain guide.