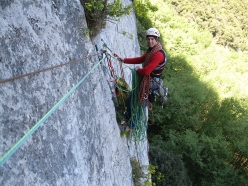 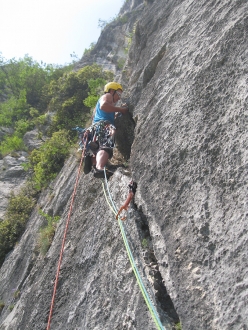 Via Fabio Comini, parete di Padaro, Arco: the line of the climb and the descent
Photo by Alex Bertolini, Leonardo Martinelli

In June 2017 Alex Bertolini and Leonardo Martinelli established a new multi-pitch rock climb at Padaro in the Valle del Sarca above Arco (Italy) in memory of their friend Fabio Comini.

We made the first ascent of Via Fabio Comini last June after having spent many days climbing and cleaning a route up the Padaro rock face. We wanted to climb a new route in honour of our friend and former colleague who died prematurely on 21 May, 2015 in an accident at work.

Fabio was 26. Originally from Ascoli Piceno, he’d moved to Verona a few years ago because of his job. He was also profoundly in love with the mountains and rock climb, hence our idea to climb this route in his memory.

It took us five long days to clean the route which required far more effort than we had originally thought; a further three days were needed to clean the path and mark the approach and descent. The route has been freed entirely, and it follows a logical line up the rock face, past pumpy and varied climbing along chimneys, corners and cracks.

The six pitch outing is about 180 meters high and, although fairly short, is nevertheless demanding. The rock quality is good and the climbing is protected by a mix of pegs and slings on threads and trees and, where necessary, bolts on the most exposed and demanding sections. Obligatory VI, two sections of VIII or VII/A1. All belays are equipped with two bolts; one with an abseil ring.

We believe this route, despite being short, offers fun climbing, is highly satisfying and above all a great way to remember a truly extraordinary person .... Fabio Comini.