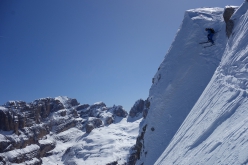 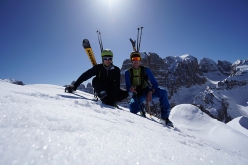 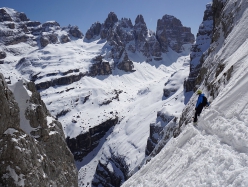 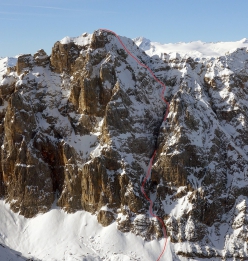 Crozzon di Val d'Agola in the Brenta Dolomites and the line skied on 01/05/2019 by Luca Dallavalle and his brother Roberto Dallavall. The photo was taken in February from Foto di febbraio fatta Cima Mandròn
Photo by archivio Luca Dallavalle

During what seems to resemble a never-ending winter, on 01/05/2019 Luca Dallavalle and Roberto Dallavalle completed what is believed to be the first ski descent of the NE Face of Crozzon di Val d'Agola in the Brenta Dolomites.

Crozzon of Val d'Agola is an imposing mass of rock located between two valleys up in the Brenta Dolomites, Val d'Agola and Val Brenta. It is an extremely remote summit, rarely visited even in summer via its normal route on the SW Face due to its very loose rock. I’m not aware of any line on the NE Face but this side of the mountain always caught my eye, every time I walked along the path that leads from the Casinei hut to Rifugio Brentei.

It wasn’t easy to identify the line and actually over the last 4 years it never even formed completely. After the abundant spring snowfalls and given that temperatures were still unseasonably low, on the 1st of May Roberto and I decided to check it out. We weren’t particularly confident that we’d succeed and that’s why we climbed up the line we then wanted to descend. Discovering a route that could be skied right from the summit all the way down the northeast face was immensely satisfying.

Some details: total height difference 1550m, height of the NE Face 700m, 1000m if you consider the screeslope all the way down into Val Brenta. We set off from Vivaio del Brenta at 6.45 am, reached the summit at 10.15. Upper slope 50-55°, central gully 45° with some sections circa 55°. Extremely exposed. We skied the entire line except for 20m on the lower section, where we downclimbed past some rocks.

25.04.2019
Cima Scarpacò NW Face, Dallavalle brothers complete demanding ski descent
Luca Dallavalle reports about what is likely to be the first ski descent of the NW Face of Cima Scarpacò (3252m) in the Adamello - Presanella group, climbed and skied on 22/04/2019 with his brother Roberto Dallavalle.