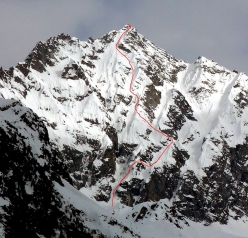 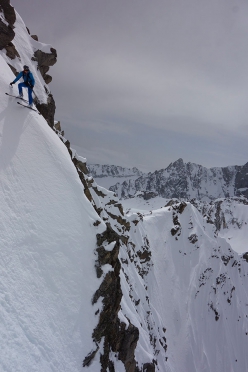 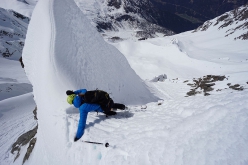 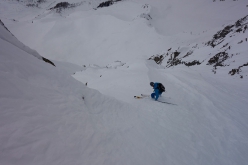 Luca Dallavalle reports about what is likely to be the first ski descent of the NW Face of Cima Scarpacò (3252m) in the Adamello - Presanella group, climbed and skied on 22/04/2019 with his brother Roberto Dallavalle.

The descent down the complicated but beautiful NW Face of Cima Scarpacò came about by chance; a friend of mine who didn't know where Cima di Bon lies sent me a photo from the other side of the valley, asking if it was the mountain in the photo. It wasn’t, actually, the mountain was the NW Face of Scarpacò, with an obvious 600m line I’d been observing for some years now and that since 2014 has never been in such good condition. The face is beautiful, you can’t not notice it as you ascend to the Denza refuge.

After carefully studying the photo, my brother and I said "why not"? Taking advantage of the excellent snow conditions, the next day climbed up to take a look, despite being filled with doubts. We ascended a logical line and during the descent we deviated slightly from the ascent route, down the powdery ribs to avoid the icy and mixed sections we’d dealt with earlier in the day. It was a very demanding descent but proved highly satisfying.

During the descent we noticed other variants and possibilities, but the link we chose is the only route that starts from the summit and avoids having to make any abseils, even if many sections were somewhat at the limit.

Total height difference: 2100m (departure from Stavel). Height of face: circa 600m; summit reached at 12.30
Estimated difficulties: for the conditions we encountered 5.4 E4