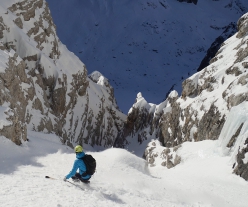 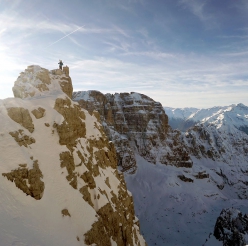 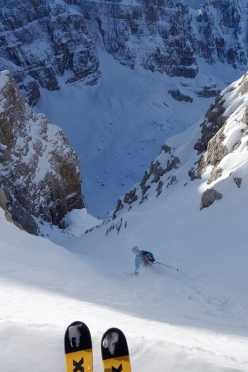 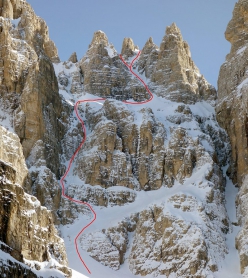 Luca Dallavalle reports about his Sunday 8 ski descent with his brother Roberto down a bold line on the west fece of Sfulmini in the Brenta Dolomites, between Torre di Brenta and Campanile Alto.

Sfulmini is a splendid mountain group in the Brenta Dolomites located between Campanile Alto and Torre di Brenta. We had considered a descent down the west face last year but we didn't ski it because there was too little snow.

On Sunday, as so often happens, Roberto and I set off with no precise goals. When we reached the area after the long approach from Val Brenta we noticed that the line looked in condition so we climbed up it and managed to ski it all. We ascended via a slightly different line in order to tackle two fun sections at the base and in the center of the face, which we then avoided during the descent in order to ski the line integrally.

It proved to be a great run through powder in a superb setting. I have no news of previous descents although I have to say I didn’t do not much research beforehand, in order to avoid spoiling the joy of discovery which is what motivates me most to go ski mountaineering.

25.04.2019
Cima Scarpacò NW Face, Dallavalle brothers complete demanding ski descent
Luca Dallavalle reports about what is likely to be the first ski descent of the NW Face of Cima Scarpacò (3252m) in the Adamello - Presanella group, climbed and skied on 22/04/2019 with his brother Roberto Dallavalle.