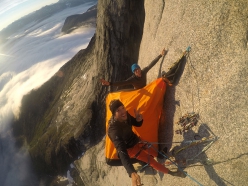 Vinicius Todero reports about a 40-day climbing trip to southern Greenland with fellow Brazilian climber Marcos Costa in August 2018, during which the two repeated the famous Moby Dick on Ulamertorsuaq and, on the west face of the same mountain, established a 1000m new climb called Quajanaq. This shares sections of Moby Dick and Magic Tromblon.

Last summer Marcos Costa and I carried out a 40-day expedition to southwestern Greenland, more precisely to the Tasermiut fjord with the idea of repeating some of the big walls in the region and also to establish a new route. After 3 planes, 2 boats and 4 days of travel we finally arrived at our base camp. The big walls in the Tasermiut fjord are probably the most famous and popular climbs in Greenland, nevertheless their maintain their wild atmosphere. During our stay we met only two other groups of climbers and very few groups of tourists

The day after our arrival we attempted a 600m route on Nalumasortoq (Nalu). After a 5-hour hike and slow progress on the route we had to retreat after climbing only 250m. We soon realised that the dimensions and difficulties in Greenland are far bigger than they initially appear, and good logistics are necessary to climb these walls. After this frustrated first attempt we changed our focus to our main goal, the 1200 'm wall of Ulamertorsuaq (Ula). During the following two days we carried our gear to the base of the mountain and and studied the lines. Our choice fell on the classic Moby Dick (7c+/A1, 1200m), first ascended in 1994 by an international team comprised of Kurt Albert, Ben Masterson, Didi Langen, Hans Martin Götz, Walter Obergolser, Helmut Gargitter and Stefan Glowacz.

After transporting our gear we had a forecast of only had two days of good weather, so we decided to attempt a 2-day ascent. On the first day we climbed 450m of "slabs", the first part of the route. The climb itself was quite easy and well protected, the tough part - and what made us lose a lot of time - was hauling 70kg of equipment and supplies up the slabs. We planned to set an advanced camp on the wall for our future attempt at establishing a new route, and so we carried a lot of food, water and equipment during this first day. On the next day we completed a 20-hour push to the summit, free climbing most of the pitches up to 7c+. We had to climb the last 3 pitches with headlamps and we reached the summit at 12pm. At 4:30am we returned to the portaledge, accompanied by the first rays of sunlight. After a few hours of sleep a violent storm caught us in the portaledge, forcing us to spend the next 36 hours on the wall.

With the joy of having accomplished our first goal we started to look for our next goal: a new route on Ulamertorsuaq. From the ground we visualized a possible system of cracks though the centre of the upper pillar, and we also studied what might have possibly been an untouched dihedral in the lower part of the wall. Going on what little information we had found online and in magazines, it appeared that there were no routes on this part of the face.

On the 26th of July we started up our new route. After 3 pitches we discovered two very old anchors, we guessed that these were rappel anchors as there are no reports of routes in this part of the wall and the cracks in the lower corner were full of vegetation, devoid of any signs of anyone having ever been there before. From the 6th pitch onwards the wall didn’t offer much in the way of natural protection on new terrain, so we decided to follow Moby Dick for 5 pitches until the bivouac ledge at 450m. After the ledge we moved left, following the route Magic Tromblon for 3 pitches and then entering new terrain. The following 8 pitches were just amazing! They starting with some superb face climbing, crossed some small roofs and aretes and finally reached the cracks that we had seen from the ground. The crack starts as a finger crack, later changes to a hand crack and ends with an interesting 50m offwidth. Opening some of these pitches, while climbing them free, was the highlight of our expedition.

On pitches 23 and 24 we again followed the route Magic Tromblon until a small ledge. Pitch 25 is and impressive and difficult arete; as our intention was to open a route that could be climbed free, we added seven bolts to the arête since it was not possible to place natural protection. We estimated the difficulty of the arete around French 8a/8a+. After the arête two more pitches led to the the summit.

In total we spent 12 days on the wall, split into four different pushes, opening and free climbing most of the pitches. Only pitches 25 and 26 weren’t free climbed. We had planned to attempt a free climbing push of the entire route during the last eight days of our expedition, but the weather worsened significantly prohibiting us from even starting an attempt. Three days before returning home our equipment was still 600m high on the wall, and we were therefore forced climb the mountain in alpine style via an older access route in order to reach the top of the wall and rappel down to retrieve our gear. That day a British base jumper joined us and after nine hours of effort to reach the top he jumped from the summit into the sea of clouds that was covering the fjord, returning to base camp in less than five minutes. We on the other hand were about to start our 1000m rappel journey back to the ground.

We named the route Qujanaq, which means "Thank you" in the local inuit language. We chose this name to thank them for their generosity. Inspiration for the name came when a family from the closest village was fishing in the fjord and invited us to join them on a small trip in their boat to the upper part of the fiord, where there is a giant hanging glacier that joins the sea. On the way back the old lady, standing up in her boat, opened her arms toward the huge glacier and waterfall and screamed "Qujanaq". Although we didn’t yet know the meaning of the word, we instantly understood that she was thanking Mother Nature for her greatness.

27.08.2015
Ulamertorsuaq, Swiss attempt to free climb Piteraq in Greenland
Over a ten-day period in July 2015 Silvan Schüpbach and Bernadette Zak attempted to make the first free ascent of the 1200m high Piteraq up Ulamertorsuaq in Greenland. Except for a 3m pendulum on pitch 22, the swiss alpinists climbed everything free with difficulties up 7c, R, X.

31.08.2018
Robert Jasper completes Stonecircle on Greenland solo trip
German rock climber Robert Jasper has returned from his solo expedition to Greenland after having made the first ascent of Stonecircle (7c, 450m) up Molar Spire above the Angmassalik-Tasilaq Fjord.