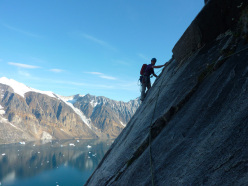 Ian Faulkner on the first ascent of ‘Cosmic Rave’ on the Horn of Upernivik
Photo by oxfordgreenlandexpedition.com 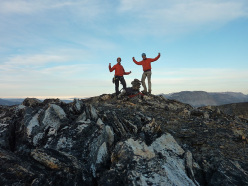 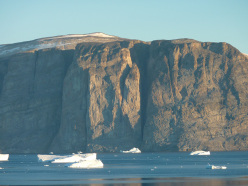 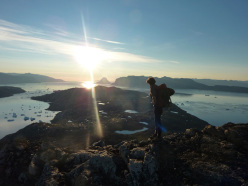 Peter Hill descending the ridge of Umanatsiaq Mountain in the midnight sun after the first ascent of ‘Flake or Death’
Photo by oxfordgreenlandexpedition.com

This summer Tom Codrington, Jacob Cook, Ian Faulkner and Peter Hill, a small team of climbers belonging to the Oxford University Mountaineering Club explored the West coast of Greenland in a small sailing boat skippered by Angela Lilienthal and Clive Woodman. The aim was - obviously - to establish new routes and, making the most of almost 24 hour sunlight, over a five week period they successfully climbed a flurry of new routes, including 5 big walls, two of which up hitherto untouched 800m faces - in the area close to Uummannaq. For route details check out the list below, not before having read what Codrington told Planetmountain about the experience.

Tom, first of all, why did you opt for Greenland?

Mostly because it sounded like an adventure. If you're going to "go big", you might as well go really, really big! We were inspired by reports from previous trips which talked about vast, unexplored cliffs in beautiful fjords. We weren't disappointed.

Which routes stand out most and why?
Probably two routes; my personal highlight was "The Incredible Orange", the first ascent with Ian Faulkner of an 800m-high sea-cliff which we dubbed Ivnarssuaq Great Wall. The cliff was totally unexplored and completely vertical - we dislodged rocks from near the top and they didn't bounce before hitting the sea! It was also really committing, and every pitch was near our physical limit. I managed some pitches with a backpack on halfway up this ridiculous Big Wall which I would probably have fallen off if they were in the Peak District. It took us three days and we had our fair share of adventures - Ian took a 10m whipper halfway up, and I got hit in the face by a rock - but the climbing was fantastic, the views over the fjord were unbelievable and the feeling at the top was unbeatable.

And then there was a second route?
Jacob Cook and Ian Faulkner put up "Cosmic Rave" (1200m) on the Horn of Upernivik Island which was a real triumph. We knew about the line from an attempt by Matt Burdekin and George Ullrich in 2010 and it was one of the main reasons why we came to Greenland. It follows a thin crack line up this immaculate granite slab, sustained at E4ish with some really technical sections - Jacob rated it E6 6b - then breaks out onto the 500m headwall. The route took absolutely everything they had. We'd been daydreaming about this line for months so getting to the top was pretty special.

The entire adventure was based from a sailing boat.
Yes! Let's not forget the longest route of all - sailing to the crag! Peter Hill and I joined Clive Woodman and Angela Lilienthal on their boat and were given a crash course in seamanship while sailing 2500 miles to Greenland from Canada. One of the hardest routes I've ever done!

So after having been there, what are your conclusions about Greenland?
Greenland is a stunningly beautiful place. Icebergs, whales, fjords, 24h daylight - it's hard to beat. There's a huge amount of climbing potential there too, although there's also a lot of unstable rock. We were very lucky, in that lots of expeditions to Greenland have been hit-and-miss because of the ice or the weather. We're definitely tempted to return, although part of Greenland's appeal is that it's so wild and unspoiled. Perhaps we've had our turn! Never say never though!


THE BIG WALLS
Horn of Upernivik Island (1700m)
Choss, the Universe and Everything E2/XS 5c 1200m 21-22/07/13. Tom Codrington & Peter Hill made the second ascent of the mountain in a single 42h Alpine push up a series of weaknesses before down-climbing and abseiling the route, meeting the line of ‘Cosmic Rave’ at half-height.
Cosmic Rave E6 6b 1000m 21-25/07/13. Jacob Cook and Ian Faulkner followed George Ullrich & Matt Burdekin’s 2010 super-direct attempt on the face, fixing lines to 300m before pushing to the top to claim the first ascent of the main face and the third ascent of the mountain in a 30h push and descending via Choss, the Universe and Everything. Their first attempt at a push was aborted after rockfall caused by Tom and Peter above. The team placed one bolt on the route.

Uummannaq NW peak (1170m) - Islands in the Sky E4 6a 810m. Ian and Tom climbed the lower tier of the peak Alpine-style before rain forced a retreat down a scree gully. Jacob, Tom and Peter returned up the scree gully to extend the route up the headwall in a 20h push to make the second ascent of the peak, descending via one troublesome abseil and a series of scree gullies.