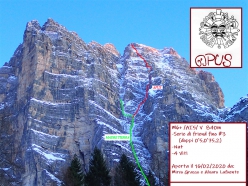 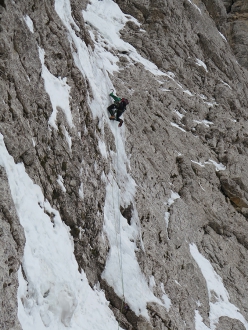 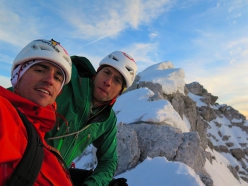 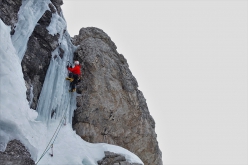 Winter mountaineering in the Zoldo Dolomites: on Rocchetta Alta di Bosconero the mountaineers Mirco Grasso and Alvaro Lafuente have made the first ascent of Apus, a mixed route that shares the first 5 pitches of Madre Tierra then ascends an evident gully all the way to the summit. Grasso reports

Rocchetta Alta di Bosconero is on fire! So to speak. At present the who rock bastion in the heart of the Zoldo Dolomites is in ideal winter conditions and Madre Tierra, the mixed climb recently established by Santiago Padrós and Diego Toigo, is fast becoming a modern "classic". Mirco Grasso, during the first repeat carried out with Matteo Furlan, noticed that the mountain held more in store and he returned on 16 February with Alvaro Lafuente from Spain. Instead of traversing off left at the top of the fifth pitch of Madre Tierra, they duo continued straight up via a logical gully to the summit. The new route is called Apus, is described as a "beautiful alpine outing over 800m high" and breaches difficulties up to M6+, AI5, V.

After the usual scouting around for a partner, it turned out that a friend of Santi called Alvarohad just arrived from Spain that evening and was free the next day. I got in touch and basically suggested he climb a mountain he’d never seen before with a complete stranger,. Completely psyched he accepted, perfect!

We did the usually approach from the Bosconero hut, by now I knew what lay in store and we quickly reached the base of Madre Tierra. During the approach I realised that conditions were far better than they’d been two weeks earlier. We quickly climbed the first five pitches, then we followed the obvious gully directly above us, instead of traversing left as the other route does.

The good conditions enabled us to climb fast and enjoy the route, we always managed to find good rock pro and some pitches turned out to be really interesting! We only left a few pegs insitu at the belays of the two crux pitches, all the rest can be protected easily with Friends.

I have to admit I’d never considered this mountain in winter, yet in the last two weeks I’ve climbed it twice! We prepared the abseils and soon joined the same descent as Mother Tierra, meeting the other teams that were climbing it that day, then we headed quickly down to celebrate!

In some religions and mythology of South America, the Apu are the spirits of the mountains. APUS for its part is a beautiful alpine outing, in the heart of Rocchetta Alta Bosconero!

A small note: in our topo we’ve also marked the grades of the first pitches of Madre Tierra. These are slightly different from the original grades as conditions were considerably different.