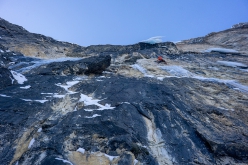 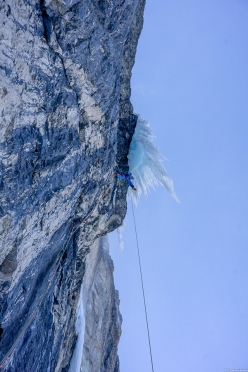 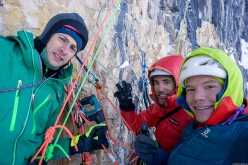 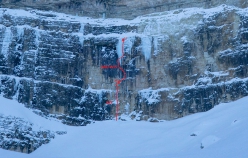 The climb was Santiago Padrós' idea, he spotted the line while skiing down the famous Val Mezdi some time in November. It was still early in the season, there was still loads of snow around and not much ice, but we really wanted to climb some ice and the line in the center of the valley looked superb. Daniel Ladurner and I didn’t need much convincing! And if for some reason we couldn’t climb it, at least we’d have had a great day ski mountaineering in the Dolomites!

On a cold November day we gathered beneath this huge face after the long approach on skis. The wall was far steeper that we’d expected... and to think that we’d taken bolts just in case we’d need them for the belays! We swung leads to reach the drip, then we bailed in the hope that this would form even more in the next few weeks. In truth this was nothing more than an excuse, since at that stage we were completely frozen! A fortnight later Santi and Daniel returned in extremely cold and windy conditions to make the pitches a little safer and to complete the climb to the ledge, despite the fact that the drip hadn’t grown.

Unfortunately due to various commitments we won’t be able to return together before the end of the season: although we didn’t free the pitches during the first ascent, we didn’t use any aid so we’ve suggested some grades to give an indication of the difficulties.

The name derives of the ice climb derived from a Spanish toast - Arriba, Abajo, Al Centro, Pa Dentro. We changed it a bit and included some German and Italian, given that we were an international team. The route is fully equipped with bolts and pegs, for a repeat you’ll need not much more than fifteen quickdraws and a selection of ice screws.